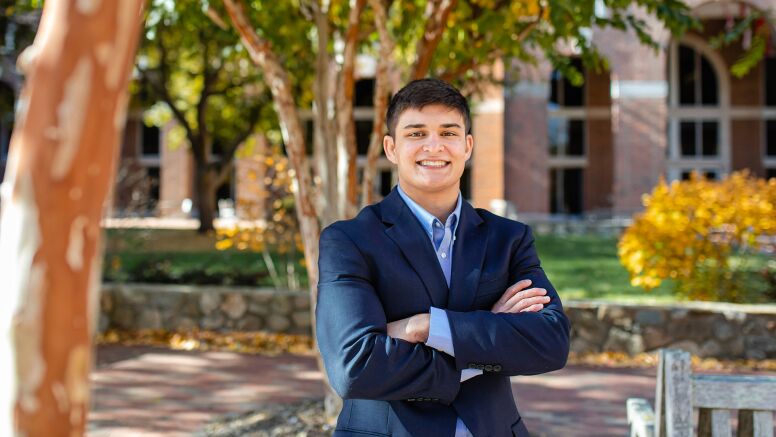 Gino Esposito (BSBA ’21, MAC ’22) radiates positivity even when the world can be downright gloomy. He is a renaissance man with interests that range from wrestling to short story writing. But more than his eclectic skillset sets him apart. In these times especially, his kindness and humanity are noteworthy.

“Gino has sought out and fully embraced so many aspects of what makes UNC such a special place,” says Jackie Fritsch, associate director of admissions and recruitment for the Undergraduate Business Program (UBP) at UNC Kenan-Flagler Business School, in Poets & Quants For Undergrads Best & Brightest 2021. “He has excelled as a student and as an athlete, and still made time for service to others. Education can change lives, and Gino committed to making every moment count to grow and learn, challenging himself, and supporting others. Gino is a brilliant, kind, humble and inclusive leader. He makes us proud every day.”

Although Esposito’s mom graduated from Carolina, the truth is that UNC was not his first choice. But the University’s good wrestling team and the potential for getting into the UBP won him over. Now, he can’t imagine having gone anywhere else, and he decided to stay post-graduation to attend the Master of Accounting Program (MAC) and two more years of NCAA Division I wrestling.

Esposito credits a two-week trip to South Africa that was part of the UBP’s Global Immersion Elective (GIE) with changing his life. 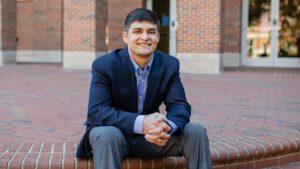 “The depth of the experience was something I had never experienced before,” says Esposito. “I worked with big companies, as well as entrepreneurs who are trying to create a better life for themselves and their families, and heard their stories and experiences in a different part of the world. I think that really changed my whole outlook, not only on business but a lot of aspects of my life as well.”

He says he recognized shared humanity and the desire to be the light in the world. It was then, during that journey abroad, that Esposito began to think about entering the Catholic priesthood. Esposito says he never imagined such a life before taking this trip. It had a large impact on his mindset.

“Even on our own campus, people are struggling with finding meaning in their life and in some cases even finding a reason to keep getting up in the morning. That physically hurts me. It makes me sick to my stomach,” Esposito says. “Seeing those things, I want to give my life to helping people. That crisis of meaning is very serious and large.”

What’s most interesting and unexpected is that Esposito’s desire to follow his faith and become a priest have not changed his motivation to learn more about business. While most would believe that a priest might eschew business, Esposito has a completely different stance. Instead, he sees his knowledge of business as being a way to have a positive impact, particularly on poverty.

“Business skills can help with being a priest,” he says. “Man does not live on bread alone. This country is the wealthiest country in the history of the world, yet there is something missing in people’s lives. I have a desire to be there for those people who are in a place of despair or hopelessness.”

Spending time at the Newman Catholic Student Center Parish and beginning to prepare for a life as a priest is part of Esposito’s regular routine.

Of course, he also spends much time focusing on the MAC program.

“There are things you get exposure to in undergrad but now it’s bringing it to a depth I didn’t get then, especially on the finance and accounting side, just getting a deeper level of mastery over those concepts,” he says. “I feel it’s building on and complimenting what I’ve done in undergrad.” 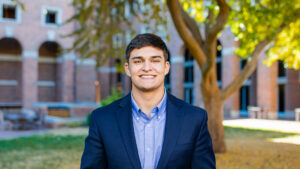 Not only is he a student, he is a teaching assistant for Kristin Wilson, a strategy and entrepreneurship professor who teaches business ethics at UNC Kenan-Flagler. This role puts him in the slightly awkward situation of helping to teach some of his former classmates, but Esposito sees it as another opportunity to help.

Besides, he is always pushing himself to higher ground. While he was an undergrad, he was selected to be part of the prestigious Kenan Scholars program. Esposito took on a research project with a big scope that took a lot of time and effort, and made a big impact, earning him the Frank Hawkins Kenan Distinguished Scholar Medal. While working on the project, he built a connection with Wilson, who helped guide him. And he discovered the power of immersing yourself in your work with your entire heart and soul.

“You’re agreeing to get on a ship, but you don’t know how far away the destination is,” he says.

Writing your own story

Limiting achievements to academics isn’t an option for Esposito. He always intended to attend graduate school, which also would enable him to continue to wrestle for one more year. Esposito, who began wrestling at 5 years old, serves as a captain and can’t imagine life without the sport. 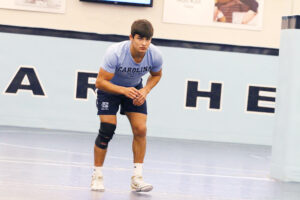 “Wrestling is perfectly fair,” he says. “You and this other person weigh exactly the same. You’re going to go out, you versus him. There’s no equipment. Just a mat. Let the best person win. When you lose you can’t point your finger and say, ‘They didn’t pass me the ball.’ There are no excuses.”

You also can add entrepreneurship to Esposito’s resume.

He comes from a large family with siblings and step siblings who range in age from 4 to 28. They enjoy breaking bread and watching movies together. Apparently, they also like trying their hands at a startup.

During the pandemic, he and family launched CappuGino’s Coffee and Shakes, a coffee shop in his native Milford, Connecticut.

He sees the business as a way to give back to the community. They hire locals, including high school students, and work with many nonprofits to help them fundraise. His aunt runs the day-to-day operations – they have invested in a food truck – and he enjoys to applying what he’s learning to the family business.

Crunching numbers, leading with empathy, following his faith and developing an entrepreneurial spirit aren’t all of his story. Esposito is also pursuing fiction writing. He has written about 20 stories that range in length from five to 25 pages. His passion for writing grew after a lifetime of reading and taking a fiction writing class as an undergraduate.

He continued working on stories after the classes ended. And George Lensing, a now-retired distinguished English professor who attends church with Esposito daily, offered to mentor him and provide feedback. Now, the two discuss his stories over coffee. Lensing provides him with pages of notes, and Esposito hopes to publish his writing soon.

“Stories are so powerful. That’s what moves us,” says Esposito. “All of our lives are understood in stories. The power of a story is to be able to get those different perspectives and see what we could be.”

Another part of his story is gratitude.

“I am grateful for my parents, siblings, family, professors, coaches, mentors, teammates, and friends for supporting me and making me who I am,” he says. “I couldn’t do anything without them. As they say, ‘No man is an island.’”