Skip to content Skip to Programs Navigation
Leading in the middle: Who’s got the power?

Leading in the middle: Who’s got the power? 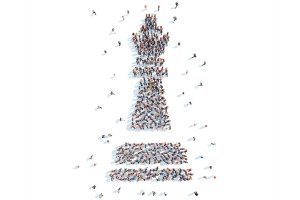 Quick – what comes to mind when I say power?

Often it is a not so flattering vision of a power hungry, manipulative individual. If we transition this vision into organizational life, we can think of people who we have seen use power to manipulate others, to get their own way – perhaps at the expense of the organization– or to ascend the corporate hierarchy, leaving a wake of damage as they go.

Although we have all certainly seen this vision play out, power in and of itself is a value neutral term. According to Merriam-Webster dictionary, power is “a person or organization that has a lot of control or influence over other people in organizations.” This definition implies nothing about the potential use of misuse of power – it is simply the ability to influence others.

This last part of the definition is the most critical aspect of power. Simply put, power is the ability to influence others. If you want to proactively add value to your organization, you will have to influence others – and to do that, you need to attain power for yourself and align your initiative with others who have power.

If you are working in the middle of an organization, you will have to be very cognizant of not only how much power you have, but also the power of others who can support what you want to accomplish. This knowledge can both help you move forward and avoid trouble.

Here are four cues and clues you can use.

Resources: Who gets them?
Getting things done in an organization requires resources, such as money, people and time. People who have power tend to get not just their fair share, but an unfair share of these crucial assets. Look at who gets the biggest budget, whose department is growing and who gets time with key executives. And when thing get tough, see whose budget or department doesn’t get cut. Non-crucial resources – aka perks – like office size and favored locations are other key indicators of power.

Responsibilities: Who has them?
Power is given to those who can get important tasks completed, so look for who has ownership of the key projects, gets chosen to lead the best teams and is called upon to head up significant committees. Seeing who gets these “plum jobs” is a great clue as to who has the power.

Relationships: Who are the power players?
People with power tend to hang around with others who have it as well. Check out who spends time together at work and outside of work – who has meetings or lunch with key players spends time with them socially when the work day is over.

Rules: Who makes them? Who breaks them (and gets away with it)?
Rules are made – and broken – by those with power to serve their needs. Find the people who create the rules and guidelines, have the power to change them and ignore them with impunity – such as the executive who brings new people on during a hiring freeze.

Using these cues and clues will help you understand who has the power, which can make you more effective at leading in the middle and getting things done. This will help you move up within the organization and perhaps obtain a few of these trapping of power yourself!