Skip to content Skip to Programs Navigation
Leading and serving: From the Army to business school

Leading and serving: From the Army to business school 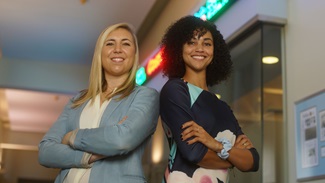 Friendships can change the course of your life. Just ask Charlotte “Charlie” Burnett and Michelle Kimbrough. They met 2014 while serving in the U.S. Army at Fort Bragg.

Kimbrough served for more than seven years as a logistics officer under the Special Operations Command and the 101st Airborne, deploying in support of Operation Enduring Freedom. Burnett served as a human resources officer in the Special Operations Command – an organization that continually deploys hundreds of soldiers across 10 countries in the Pacific Region – for four years.

Together they executed yoga poses, run triathlons and 5Ks, and volunteered for the community. They launched the Fort Bragg Women’s Mentorship Network, and nurtured each other’s leadership.

Naturally, they decided to earn their MBAs at UNC Kenan-Flagler Business School. Members of the Class of 2019, they lived together at the start of the full-time MBA Program and went on to become rock-star student leaders.

As presidents of Carolina Women in Business (CWIB) and Alliance of Minority Business Students (AMBS), Burnett and Kimbrough, respectively, ran organizations with important missions and had a significant impact on the community.

Part of those student clubs’ work is hosting professional conferences at the School.

Kimbrough initiated the first Diversity Conference dedicated to being more inclusive in business. The theme was the “art of thinking differently together” and the event focused on coaching, mentoring and sponsoring diverse candidates for graduate school and jobs.

“It was open to everyone,” says Kimbrough. “We want champions of diversity and allies of underrepresented minorities to understand their roles in hiring and supporting careers.”

Burnett led the planning for the 13th annual CWIB Conference, one of the largest student-run conferences. Focused on “breaking barriers,” the event on Nov. 2, 2018, showcased how women across a range of industries have overcome challenges. It attracted 400 attendees, which is higher than the usual 300. In addition, 50 prospective students participated in Women’s Workshop, held in conjunction with the conference.

The conference and leading the club have strengthened Burnett’s hope for the future.

“The number of women in business will grow,” she adds. “UNC Kenan-Flagler sees the importance of reaching gender parity and we are looking for ways to increase the number of women applicants. Part of the solution is letting women who have nontraditional backgrounds know that business school is an option.”

Bringing others to the table

For her part, Kimbrough worked closely with admissions to hone plans for appealing to a larger group of people to gain more diverse perspectives. A Consortium fellow, she spent time communicating about the versatility of the MBA degree to potential applicants and educating admissions committees on how to broaden their perspectives. For example, she points to data about underrepresented minorities’ standardized test scores and encourages schools to reconsider their range to open up enrollment to a wider group of students. Burnett clued her into these kinds of stats, she says.

“We’re not just diverse because of our skin color or gender,” says Kimbrough. “We bring diversity of thought and experience to the business world.”

Kimbrough stresses that she and Burnett demonstrate there really is no such thing as a non-traditional MBA candidate.

“Many men and women self-select out of applying to top MBA programs because they feel they’re not traditional candidates and therefore won’t be successful,” says Kimbrough. “It’s absolutely not true.”

She points to the incredible success students such as Burnett and herself are having on campus. Initially, she was hesitant to apply to business school but she wanted to be able to get a job that allowed her to have more impact.

Burnett first floated the idea of earning an MBA as an undergraduate who studied political science, and was planning to attend law school after her four-year commitment to the Army was completed. Burnett thought more deeply about her options, including ways she could continue to serve beyond the military

“I saw a need for more of an intersection between business and policy,” says Burnett, who was a Kenan Scholar and Tillman Scholar. “Business school is a way to capitalize on this opportunity.”

In addition, she wanted to be in her home state of North Carolina. She comes from Raleigh and attended Wake Forest University for her undergraduate studies.

The appeal of UNC Kenan-Flagler

On the other hand, Kimbrough had never given a thought to earning an MBA. One year after her military career ended, she was working in tech sales and teaching yoga classes.

“I was working, making money, but I was not leading, mentoring or having an impact,” says Kimbrough. “So, I took Charlie’s advice and started pursuing a business school application.”

Born in Colorado Springs, Kimbrough has lived all over the world. After graduating from West Point with a B.S. in Spanish and German and a minor in environmental engineering, she sought a smaller business school with a flexible core.

She found those wish-list items at UNC Kenan-Flagler, but she still was not 100% convinced. Other West Point grads reached out to her, and one had been in her unit. She became acquainted with the Veterans Association at UNC Kenan-Flagler. After lunch and a School tour with her old Army friend, Kimbrough felt a warm welcome, she says.

While at Fort Bragg, the women began as peers and then Kimbrough became Burnett’s superior.

“Michelle took me under her wing as I was understanding the climate and world we worked in,” says Burnett.

“Those little energy bolts have been a big help,” says Burnett. “The reason I’m doing CWIB is because Michelle said, ‘Why not? You’d be amazing.’” 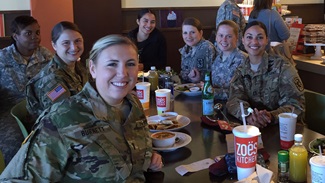 The support goes both ways. Burnett is the reason Kimbrough went to business school.

“Charlie said I could polish leadership and mentoring skills by earning an MBA,” says Kimbrough.

Burnett and Kimbrough were active in the School’s Veterans Association, with Kimbrough serving as executive vice president. They encourage other vets to apply to business school.

Kimbrough also educated admissions staff on the value former military can bring to their programs. She says business schools and recruiters need to help former military personnel better translate their skillsets and experience in resumes and interviews.

Clearly they are great advocates for one another, which demonstrates their leadership. As they contemplated life after graduation they anticipated a brighter future with more job satisfaction, better pay and a more diverse group of people at the table.

Burnett accepted a role in private banking at JP Morgan, where she interned. Kimbrough, who studied technology, interviewed with startups, where she thinks she can have a greater impact.

Both women expect business schools – as well as the rest of society – to become ever more inclusive and representative of changing demographics.

“Many don’t fit the traditional mold of a businessperson,” says Kimbrough. “But they will be successful and get great jobs.”