Leading a breakthrough meeting: Lessons from the founding fathers 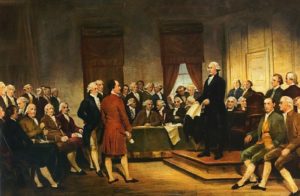 “Washington as Statesman at the Constitutional Convention” by Junius Brutus Stearns. Image via teachingamericanhistory.org

What can you learn about leading a meeting from our founding fathers? Plenty.

Consider this: meeting for the Constitutional Convention in Philadelphia back in 1787, a group of strong-willed men representing states with very different interests sat down and created a document that has been foundation of America’s achievements for over 200 years. That same document was both strong enough to provide a set of rules on how a growing nation would govern itself, yet was flexible enough to be changed with the times.

How did the founding fathers accomplish such a feat? The lessons below explain why and provide excellent rules to follow if you too are trying to achieve lasting success.

Have a good reason for the meeting.
After winning the Revolution, the founding fathers put the Articles of Confederation in place as the basis for governing the new country. Having just suffered under a strong monarchy, the creators of the Articles expressly constructed them to have a weak central government. However, it was soon realized that this approach would not work, as the states each sought to go their own way to the detriment of the whole. The fledgling nation was in peril. Recognizing the problem, respected leaders such as Washington, Madison and Hamilton proposed a meeting to fix the Articles and remedy the untenable situation.

If, in our careers, each of us hadn’t been invited to so many meetings that were unnecessary, we would easily agree this is an obvious point. But the fact that we have been means that if you are calling a meeting, you need to make sure there’s a really good reason to do so. And then…

Invite the right people.
To create a new framework for government and ensure its acceptance from the populace, the conveners of the convention had to take care to invite the right attendees. They did this by asking each state to determine who would attend to represent its interests at the meeting. By taking this approach, the conveners ensured those attending would be viewed as legitimate by their state and the resulting document would thus be legitimate.

Again, the same goes for us today. For a meeting to produce good results, we need to have all the key players there to represent the different viewpoints and interests of those affected.

Take the long-term view.
The founding fathers weren’t just looking at ensuring success over the next quarter or year or even decade. They were creating a document that could stand the test of time. Washington and the other founders knew that “the fate of unborn millions” would depend on their wisdom. They met and deliberated with this goal in mind. Just as importantly, they knew they needed to…

Face reality.
The framers of the Constitution knew the frailties and foibles of men and government. They understood that “if men were angels, no government would be necessary” – but also that men were anything but angels.

Knowing this, they strove to create rules that would free individuals to achieve their dreams, but also constrain them so as to limit their desire for power over others.

The two points above are key for us as well. Too often we seek to either avoid the real issues or just patch over the problem long enough for it to no longer be ours. But if we really want to do the best thing, we need to look reality squarely in the face and develop long-term solutions that address our difficulties. To do it’s critical to…

Do your homework ahead of time.
To ensure that they could craft a document that would last centuries, the leaders of the convention studied how governments in the past had thrived or failed. They looked at ancient democracies – such as Greece and Rome – but also read the latest thinking on government from thought-leaders of the day, such as John Locke and Jean-Jacques Rousseau. They used this knowledge to incorporate into the Constitution what they thought were the best ideas and practices from both ancient and “modern” times.

It follows, then, that we need to do the preparation required and ensure we have all the facts at hand to enable participants to make informed decisions.

Work the attendees beforehand.
Given the conditions of travel at the time, the delegates to the convention straggled in over several days. James Madison – a key proponent of the meeting, as mentioned earlier – didn’t waste this time but instead used it to meet with delegates individually as they arrived. His goal: lobbying them to change the agenda of the meeting from one of tinkering with the Articles of Confederation (the stated purpose of the convention) to its wholesale replacement.

This pre-meeting lobbying was so effective that, after it began, the convention moved rather quickly to agreeing on the principle of replacement.

Have a plan to start with.
The convention didn’t begin with the delegates just showing up in Philadelphia and starting from scratch. Leaders such as James Madison and Edmund Randolph developed a plan ahead of time. The “Virginia Plan” provided a place to start the conversation. And while it wasn’t accepted lock, stock and barrel, several facets of the plan would eventually become part of the Constitution.

These two steps – having a plan and lobbying attendees beforehand – are as critical today as they were in the time of the Founders. Each goes a long way towards ensuring success – as does the need to…

Have the presider facilitate, not dictate.
Because of his stature during the Revolution, George Washington was chosen to preside over the convention. While he could have easily used his influence to drive the meeting to a certain conclusion or launched long monologues to feed his ego, that was not his style.

Instead, Washington wisely chose to facilitate the conversation. He worked hard to ensure everyone’s voice was heard and concerns were debated fairly, following the rule that until the final document was drafted, no issue would be considered closed and could be brought back up at any time. This not only resulted in a better document, but significantly improved its chances of being accepted by the delegates.

Compromise to gain agreement.
With all the competing interests and ideas, a successful conclusion to the convention could not have been reached without honest compromise. One example was the “Connecticut Compromise.” This agreement helped reconcile the Virginia Plan – which favored the large states – with the New Jersey Plan, which favored small ones.

This reconciliation led to the creation of two types of legislatures—the Senate, in which all states were equally represented (thus satisfying the small states), and the House, in which states received representation based on population (which made the large states happy).

Having a smart leader facilitate the meeting and guide the team through key decisions (not dictate the solution) and bring them to compromise are two essential components to making your meeting meet its objectives. Once you’ve accomplished that, it’s important that you…

Get attendees to sign their “John Hancock.”
At the conclusion of the convention, the delegates didn’t just finish the document and leave. Most signed their names to the document, starting with Washington – the presider – and then state by state, from north to south.

The act of signing illustrated a strong commitment to what had just taken place. And OK, John Hancock signed the Declaration of Independence, not the Constitution – but the saying still applies.

Lobby strongly after the meeting.
It is likely that no delegate was entirely satisfied with the Constitution, but most probably agreed with Washington, who stated that this was probably the “best Constitution that can be obtained at this Epocha.” Nonetheless, many went back to their states to promote its adoption, as it had to be ratified by two-thirds – nine states, at the time – to go into effect. The most famous support of the Constitution came in the form of The Federalist Papers, a series of articles ghostwritten by Alexander Hamilton, James Madison and John Jay to attain the ratification of the Constitution by the state of New York.

Without these last two steps – gaining attendee commitment and having them lobby their organizations vigorously afterwards – all the prior work may have been for naught. So, you can’t forget these key points.

Today, many of us marvel at what the founders wrought in those hot months of the summer of 1787. But it is important to recognize that without the steps they took to make the meeting a success, they would not have achieved the breakthrough that is the Constitution.

By Mark McNeilly, professor of the practice of marketing.

This blog has been adapted and posted with permission from the author. View the original publication on Fast Company here.