When people think of regions that have experienced growing economic success in the past decade, China and other countries in Asia are likely the first examples that come to mind. Latin America is often overlooked, despite its potential for economic success.

A presentation at the 2015 Emerging Markets Conference & Latin America Day – hosted by the Global Business Center – helped me understand the problems that the Latin American economy has faced and how they can be overcome.

UNC Kenan-Flagler professor Stephen Arbogast and Patrick Duddy, former U.S. Ambassador to Venezuela, explained that one of the reasons that Asia’s economy has done so well in recent history is that much of the region has adapted more capitalist-friendly models of government. Countries like Japan, South Korea and Taiwan that were formerly ruled by authoritarian governments have embraced multi-party politics – and their economies have grown exponentially as a result.

The economic problems that have plagued Latin America can largely be attributed to political instability. Issues like turnover, succession and corruption have all contributed to a system that inhibited economic growth. For example, Peruvian government officials who had attained 7% macro growth in the country’s economy were voted out of office in a 2011 election because – despite the economic growth – people were still poor. 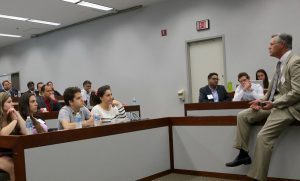 But it’s not all bad news. The Latin American economy is poised for take-off with annual GDP growth of 3%. The region’s natural resources and available commodities offer possibilities for future growth.

Also of note is the opportunity for huge conglomerates to form in Latin America, just as companies like Carnegie Steel and Standard Oil did in the U.S. during the late 19th and early 20th centuries. Prior to the establishment of U.S. anti-trust laws, these companies grew commerce exponentially and increased market opportunities and GDP. A very similar process can happen in Latin America.

Despite the dependence of commodities to get through the recession, Latin America is showing great promise for future economic gain, making in an invaluable prospect for a growing business.