Kenan-Flagler Day is a record-breaking success 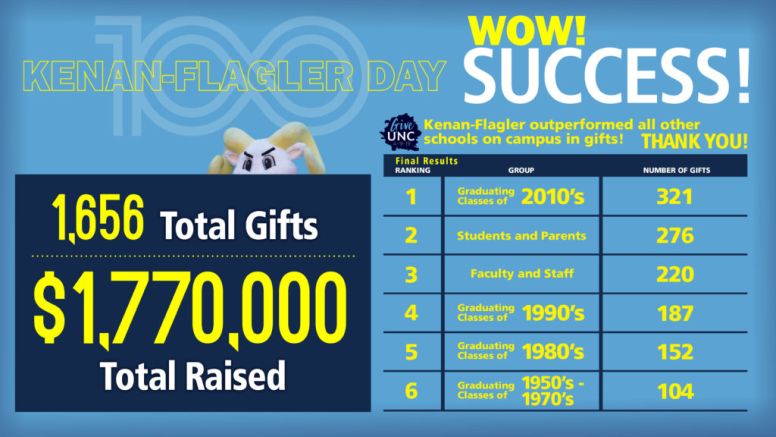 Kenan-Flagler Day was a historic success, raising more money in one day than all of our previous giving days combined. The final total was $1.77 million raised from more than 1,600 donors, making April 9 the greatest single day of giving in the Business School’s 100-year-old history.

Donors participated from across the globe, with gifts coming from more than 10 countries and a record 43 states. In addition to giving, alumni, parents and students attended 16 regional events, from Charlotte to Taipei.

Not to be outdone, faculty, staff and students on campus participated in events and activities including a dunk tank, food trucks and a champagne toast for graduating students. These members of the UNC Kenan-Flagler community accounted for more than 400 gifts on Kenan-Flagler Day.

Kenan-Flagler Day also featured a partnership with University-wide GiveUNC efforts, including a challenge against the College of Arts & Science – Battle for Carolina – that UNC Kenan-Flagler won handily. The Business School had more donors than any other school or unit on campus, accounting for more than a quarter of the University’s donor total. All told, the university raised an impressive $6.1 million from 5,994 donors on April 9.

Thank you for making a gift on Kenan-Flagler Day by making a gift, thank you. Your dollars will go to directly supporting this School – from new scholarships to vital annual support for our programs – and everything that makes us great.