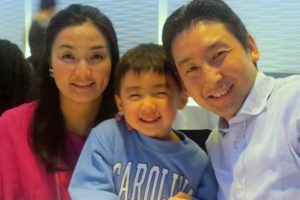 On one of his first days in the full-time MBA Program, Koichiro “Kane” Nakamura (MBA ’08) recalls Dean Steve Jones asking all 285 members of the Class of 2008 one question: How can you make a mark at UNC during the next two years and after?

“That message was very striking because I had been only thinking about what to gain from business school,” says Nakamura. “Since that moment, I shifted my mind 180 degrees and tried to take action based on what I could do to make my study group members, classmates and community happy and successful.” 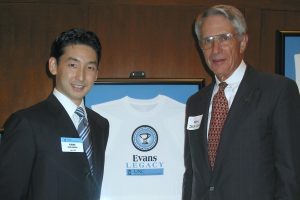 He became actively involved in the UNC Kenan-Flagler community and beyond, applying to be a member of the Admissions Advisory Board and leading the Asia team as vice president of the International Business Association.

Taking the dean’s message to heart, Nakamura developed a close bond with his study group and shared this message with them after the group completed their final assignment together:

“I was inspired by your talents, eagerness to get things done on time and positive thinking ‘Go Team’ mind. Working with a group became one of my most fun parts of grad school because of you. I enjoyed doing something for the team because I always felt that you were around me for support whenever I asked for it. So a big, big thank you. I learned a lot from you.”

“I truly enjoy interacting with caliber prospective students who have vision and a bright future.”Kane Nakamura (MBA ’08)

When Nakamura completed his degree, it was no surprise that he received the School’s MBA Core Value Award for Teamwork.

After graduation, he moved to Japan and joined the corporate finance division at SoftBank, a multinational telecommunications and Internet corporation. He took on a variety of challenging responsibilities, such as head of corporate planning, internal auditing, and sales and marketing roles. 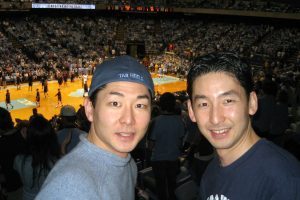 Kane Nakamura cheering on the Tar Heels with his brother

For the past three years, he has been in a sales and marketing role in Shanghai, where he has taken advantage of his bilingual language skills to handle a large-scale business launch there.

“It turned out to be a cash cow for our business in China and contributed to the biggest sales and profit since we set up our presence in China over a decade ago,” Nakamura explains.

“It was so fitting that Kane received the MBA Core Value award for Teamwork,” says Sherry Wallace (MBA ’87), director of admissions for the full-time MBA Program. “Since he graduated, he has continued to exemplify teamwork and leadership as an alumnus. When he returned to Tokyo, he became an active and enthusiastic recruiter of prospective students. Working with other alumni in support of MBA Admissions efforts, Kane eventually became my team’s go-to person in Japan.” 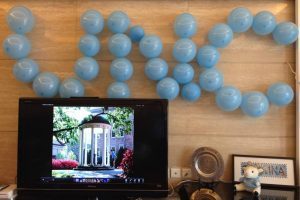 Kane’s home decked out in Carolina swag for an admitted student gathering.

“Kane’s support did not stop when he moved to Shanghai,” adds Wallace. “After he settled in China, he joined an already active alumni group there and became one of our busiest admissions interviewers. He partners with our China alumni to host information sessions and reach out to prospective students. Kane really cares about the prospective students and our school.”

For Nakamura, the most exciting part of being an alumni interviewer is giving a congratulatory call to admitted students. “I truly enjoy interacting with caliber prospective students who have vision and a bright future,” he says. “I continue to stay in touch with every applicant who participates in our UNC Kenan-Flagler events.”

Teamwork and collaboration are second nature to Nakamura. “I have moved 26 times,” he says. “Being born in the U.S., living in Japan, studying in the U.S., and working in Hong Kong and China, I might have learned how to fulfill my life, by making good friends, helping others and gaining their trust.”

In July 2015, Nakamura moved yet again – this time back to Tokyo to take on a new role at his company. In a farewell message to fellow Chinese alumni, he wrote:

“My nearly three years of staying in China has become so special and memorable because of you. I remember you welcomed me so warmly at my arrival in China when I was in the middle of nowhere. So being an alumni interviewer for Chinese prospective students seemed to be a perfect opportunity for me because it would be one way of giving back to UNC and the Chinese community… I am honored and proud to be a member of the Chinese alumni community.”

“To me, my families are more important than anything. I am not doing anything special – I am just doing what I believe will help UNC Kenan-Flagler increase its awareness because I owe so much to this great community,” says Nakamura. “So I can’t help imagining that one day in the future, I will live with this community in Chapel Hill together with lovely families.”