Rallying the community to help kids 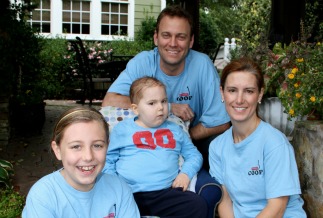 The town of Chapel Hill is beloved by those lucky enough to have lived in it, whether for a year – or four – or for a lifetime. Words often fail to capture exactly what makes this place so special. But the Herman family’s story makes it abundantly clear.

In 2009, Justin Herman’s (MBA ’05) son Cooper – then just two years old – was diagnosed with brain cancer. The diagnosis marked the start of a five-year journey that spanned five facilities in five states as Cooper underwent multiple brain and spinal surgeries, testing, radiation and chemotherapy treatments and endured countless stays in the Pediatric Intensive Care Unit due to complications.

Through it all, the Chapel Hill community – specifically the Southern Village neighborhood – rallied behind the Hermans. Neighbors organized a team of volunteers to help the family with things like cooking meals and shuttling Cooper’s sister, Grace, to and from activities. Friends spent countless hours by their sides providing moral support as Cooper underwent treatment at UNC and Duke hospitals.

Traveling across the U.S. for Cooper’s treatments confirmed what Herman and his wife, Elise, already knew: the Chapel Hill community is something special – the exception, not the norm.

Families face very different circumstances when traveling hundreds or thousands of miles for treatment – not to mention additional expenses for transportation, food and lodging, on top of mounting medical bills. For some, the financial burden is so great that they deplete their savings and, in many cases, go deep into debt while their children receive treatments that can span from a few days to several months.

And, as the Hermans discovered, there are few organizations that provide much-needed resources and assistance to families of children battling pediatric brain cancer – something they were determined to change.

In 2010, the Herman family launched Super Cooper’s Little Red Wagon Foundation in Chapel Hill. Its apartment-style accommodations – dubbed the Super ReCOOPERation House – are a “home away from home” for families of pediatric brain cancer patients receiving long-term treatment at UNC and Duke hospitals. The apartments accommodate four families and provide each with a private kitchen, sleep area and playroom – with disinfected toys – as well as assistance with food and transportation, a pediatric cancer resource center and a built-in support network.

“In addition to housing, Super Cooper provides other services we’ve been blessed with from our neighbors, such as home-cooked meals and transportation to and from the hospital,” says Herman. “We’re trying to recreate what the Chapel Hill community did for us and allow these families to focus on their child’s treatments, rather than worrying about the basic necessities of life while they are away from home in the most difficult situation imaginable.”

To those who know Herman, it came as no surprise that he and Elise were concerned with helping others even as they focused on caring for their son.

“As a student, Justin was always willing to help and take on major roles. He was never afraid to step up,” says Meghan Gosk, senior associate director of student development for the full-time MBA Program and longtime friend of the Herman family. “During a really tough time, he and Elise saw how others were suffering and wanted to help.”

And once again, the Chapel Hill community rallied behind them. An outpouring of support flooded in from some of their smallest friends and neighbors to one of the very tallest – former Tar Heel basketball player and philanthropist Eric Montross (UNC ’94), who asked how he could help and ended up joining the foundation’s board as director of community relations.

“We have kids who hold a lemonade stand and give us a bag full of quarters, local businesses that sponsor our events and individuals who have given thousands of dollars to support this initiative,” says Herman.

But what ultimately sets the Super Cooper foundation apart is the passion with which Herman and Elise share its mission and motivate others to help. “Justin and Elise can speak to the need because they’ve experienced it or witnessed it first-hand,” says Gosk. “They really connect with people.”

So did Cooper, whose bravery and unwavering joyful spirit touched everyone who knew him. Hailed as a “hometown hero,” he always greeted his doctors and nurses with hugs and smiles, asking how they were doing before they had a chance to ask the same of him. And his little red wagon soon “became his chariot” and “a symbol of hope and perseverance” as he rode up and down the hallways of hospitals around the country.

In January 2014, the Chapel Hill community joined the Herman family in mourning Cooper when he lost his battle with cancer. “Everyone loved Cooper,” says Gosk.

Cooper’s legacy lives on through the foundation that bears his name, which Herman and Elise hopes to grow to help even more families in Chapel Hill and beyond. And with Super Cooper named an inaugural partner of UNC Kenan-Flagler’s Business Cares initiative, Herman knew he’d have access to the support, guidance and resources needed to do so. “It’s about getting the message out to the right people,” he says.

It seems only fitting that the foundation shares a common goal with his alma mater.

“Business Cares is the epitome of what UNC Kenan-Flagler stands for – helping out the overall community,” says Herman.

That’s just what Cooper did – and what the Herman family continues to do through Super Cooper’s Little Red Wagon Foundation.

“Every kid who lives in the Southern Village neighborhood knows Cooper’s story,” says Gosk. “He was only with us for a few years, but the lessons he taught our community were huge.”