Julie Goodliffe had reached a dead end in her career in science academia.

Three years ago, Goodliffe (MBA@UNC ’13) was a biology professor researching molecular genetics at UNC-Charlotte. But she was spending most of her time looking for money to fund that research instead of actually doing it.

“I had spent so long training to be a scientist, and I was just begging for money,” she said. “Life is too short to not enjoy your job.”

In search of a new opportunity, Goodliffe stumbled across the website for a newly announced online MBA program at UNC Kenan-Flagler Business School. The two-year MBA@UNC program — the first of its kind from a top-20 business school — had everything Goodliffe was looking for: flexibility, affordability and the credibility of the UNC Kenan-Flagler institution.

“I decided business had all kind of opportunities, even for scientists,” she said. “I wanted to still do something science-y with a business component.”

“It was challenging,” said Goodliffe, who studied from Charlotte. “It felt real to me. It wasn’t just this online thing.”

A year into the program, Goodliffe decided to take the plunge into a full-on business career. She quit her UNC Charlotte job in 2012 and, along with two partners, started Sustainable Ethanol Technologies (SET).

SET sells the intellectual property rights to an ethanol technology developed and patented by Goodliffe’s friend and UNC Charlotte colleague Matt Parrow. The technology allows companies to produce ethanol from any type of biomass, not just corn like traditional ethanol, making it cheaper and more sustainable.

Goodliffe knew the technology had commercial potential, but Parrow wasn’t interested in selling it himself. So Goodliffe did. 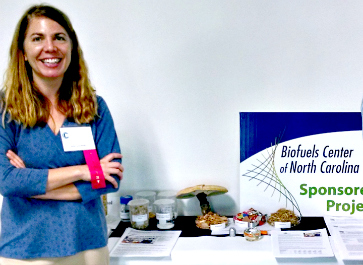 As the chief executive officer of SET, Goodliffe is responsible for everything on the business side. She’s laid out the business strategy, formed business relationships, prepared pitches and more.

Launching the company while she was taking MBA@UNC courses gave her the chance to practice what she was learning in her classes on very real problems.

Goodliffe cannot overstate the value of MBA@UNC in giving her the business background required for her job as a CEO. “I’m a biologist. I’d never looked at a financial statement in my life before,” she said. “I don’t know what I would do if I didn’t have this education. I don’t even know if I would know what people were saying to me.”

The program – which includes lecture videos, individual work and live class discussions via webcam – was surprisingly intimate. “We sat for two years looking at each other in our houses,” she said. “It was much more personal than I had thought possible.”

Although she visited the Chapel Hill campus just a few times – including her graduation in July 2013 – she saw and felt real enthusiasm for the program.

“We really felt that we were actually part of Chapel Hill,” she said. “We just felt this great energy and enthusiasm for what we were doing. We felt we were part of Tar Heel community from here.”

Goodliffe, a mother of two, has simple goals these days. She wants SET to be profitable this year, and she wants to continue being happy in her job.

“The goals are just to make everything work out as well as it can possibly work out,” she said. “A lot of people don’t enjoy their jobs. I want to enjoy my job.”