Skip to content Skip to Programs Navigation
John Pringle: Teaching as a calling

John Pringle: Teaching as a calling 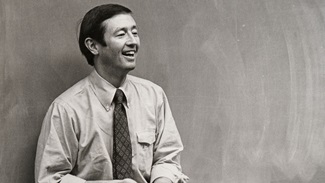 In 1956, John Pringle was a brand-new second lieutenant in the U.S. Air Force. Asked what he planned to do after his tour ended he replied, “No clue.”

And when he learned his fellow officer was going to Harvard to get his MBA, he had just one question: “What’s an MBA?”

Pringle not only found the answer – he went on to earn his MBA at Harvard.

“My long-range game plan had been to spend 25 years as a practitioner and then return to academia as a professor,” laughs Pringle, who worked six years as a banker with what is now Bank of America and two years as an economist with the RAND Corporation.

But, as Pringle recalls, a faculty member at a banking seminar advised a different path: “If you want to have any chance at teaching at a good business school, you have to get your PhD now. Later the opportunity costs get so high that you’ll never take the risk.”

Fortunately for generations of students, Pringle went on to earn his doctorate at Stanford and joined the UNC Kenan-Flagler faculty in 1972.

“It was a good decision. I had always wanted to be a teacher and I can honestly say it was fun,” says Pringle, who would tell then-dean Jack Evans, “I will teach for free, but if you insist that I grade papers, I insist that you pay me.”

Evans often shares that anecdote. “John was an excellent teacher and prepared meticulously for class,” he says. “I remember seeing a set of handouts he prepared for his finance classes back in the day; I was very impressed with the care and thought that went into those notes.”

While the exercise was for his own edification, others took notice. “It was decided that it was a good idea to formalize this process,” he says. “Someone said, ‘You look like a chairman; why don’t we make you chairman of the Core Course Coordinating Committee?’” Pringle – who insisted on weekly meetings during the initial year – continued to chair it from 1973-75. He then directed the MBA Program – assuming responsibility for recruiting, placement and other MBA functions – from 1978-81.

“John was critically important at a pivotal time when we were implementing a number of changes in the program,” says Evans. “We needed someone who understood what we were trying to do and teach, and be a spokesman for it with the students and faculty.

The work of the committee – which included Jack Behrman, DeWitt Dearborn, Harold Langenderfer, Jim Littlefield, Dick Levin and Rollie Tillman, among others – transformed the MBA Program.

“They wanted the MBA Program not just to be the accumulation of 60 credit hours of work, but a carefully integrated professional experience that moved forward in an orderly way, then moved into functional courses and gave students the opportunity to develop depth in certain areas,” says Evans.

“To compete with the best MBA programs in the country, the first year had to be much more than just a collection of courses,” adds Pringle. “We wanted it to be truly transformational so that the person who emerged was really different, and thought about problems in a different way.”

The transformation included coordinating which topics were taught – and in what sequence – in different courses so if specific knowledge were needed in a more advanced course, it would first be taught in a foundational course. The committee helped coordinate exam schedules and professionalized admissions and career services. 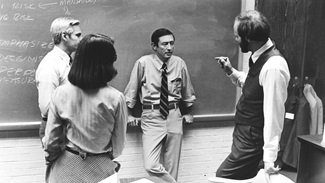 Pringle earned honors for his teaching and service at UNC Kenan-Flagler – and his dedication was reflected in his research, too. “I have always believed that if you regard teaching as the primary job of a business school, faculty members should produce a lot of written output,” he says. “More teaching did not always mean less research; but it usually meant a different kind of research. Most of my writing throughout my career was ‘expository,’ explaining and clarifying difficult concepts.”

The modest Pringle underplays his scholarship, but his CV lists pages of his books, articles and papers. Both academic and practitioner journals published his work. “Some people might argue that an article in the Journal of Applied Corporate Finance didn’t count, but I don’t agree,” he says. “After all, our job is to influence practicing managers, not each other.”

Inspiring students wasn’t confined to the halls of the Business School. Students, now adults, recall concepts of electricity and magnetism they learned in the 1970s in after-school classes Pringle and other volunteers taught in a program initiated and led by Betsy Pringle, John’s wife, at Estes Hills Elementary, where the Pringles’ four children attended.

Later, as a volunteer at Smith Middle School, Pringle helped students become conversant in such topics as finance, monetary matters, and inflation rates before they headed to a Belgium exchange program sponsored by the European Commission. He went on to teach middle schoolers about deficits and debt, Social Security and Medicare, interest rates, trade and other “headline” issues at Durham’s Montessori Community School. “Teaching those kids was a blast,” he says.

After he retired as the C. Knox Massey Professor of Finance in 2008, Pringle returned to photography, an interest that dates back to his teen years. Betsy Pringle, a professional artist and native-plant expert, suggested wildflowers as a subject, having planted many different species in the garden of their Chapel Hill home. When asked to give talks on gardens, she needed photos and “Johnny took these gorgeous pictures,” she says.

Pringle insists he is not an artist, although the beauty of his work belies that. “My pictures are those of an engineer,” he says, referring to his undergraduate education in electrical engineering at Georgia Tech: “Tack-sharp focus, accurate color, but no knowledge of composition.”

Digital was a “game changer” for Pringle because he could take “lots of pictures at zero marginal cost.” In 2005, he bought new equipment and set about learning to use it. In 2015, the North Carolina Botanical Garden hosted “Native Flowers: Gifts of Pollinators,” a solo exhibit featuring 40 of Pringle’s photographs of flowers and insects emphasizing intense detail.

While Pringle has enjoyed the many facets of his professional life, teaching remains his true passion – and his impact is enduring. A former MBA student wrote him – 10 years after graduating: “The most important lesson I learned from you is that ‘reasonable people can disagree.’”

“I would like to be remembered as a teacher,” Pringle says. “If there are students out there whose lives and whose approach to life I was able to influence positively, that would give me great satisfaction.”