John Hand: A passion for teaching 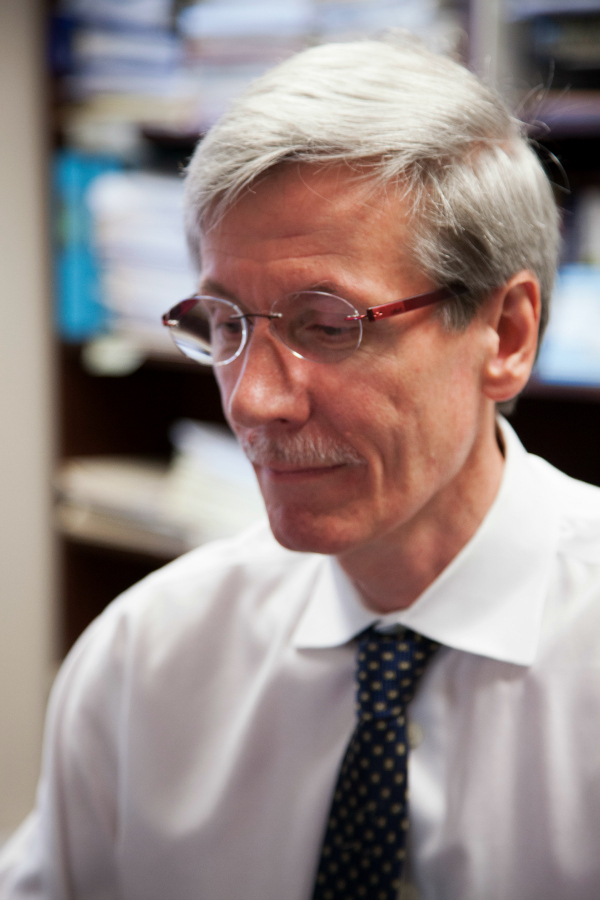 John Hand likes to approach everything with a healthy amount of skepticism.

While a doctoral student at the University of Chicago, faculty advisors suggested that Hand remove a portion of his dissertation. So he did, but then published it separately. The paper went on to win the American Accounting Association Competitive Manuscript Competition.

“If everyone’s saying this is the way it is, I’ve always asked myself ‘what about the devil’s advocate position?’” said Hand, the Robert March and Mildred Borden Hanes Distinguished Professor at UNC Kenan-Flagler. “Maybe it’s exactly the opposite or it’s very different.”

This attitude has driven his research at UNC Kenan-Flagler – from analyzing the dimensionality of expected stock returns to evaluating how well sell-side stock analysts put together their valuation models.

Hand is a pioneer in documenting stock market inefficiency with respect to accounting information. His current research involves working with Jeremiah Green (PhD ’10) of Penn State University, a former doctoral student, and Frank Zhang of Yale to evaluate what explains variations in stock returns at an aggregate level. By taking this “supra-view,” they are learning new things and possibly casting doubt on previous findings, Hand said.

“John is a true scholar,” said Ed Maydew, the David E. Hoffman Distinguished Professor of Accounting at UNC Kenan-Flagler. “Over his career, he has made major research advances in a wide range of areas including accounting for intangible assets, fixation on accounting earnings, venture capital, hedge funds and asset pricing.”

Now a U.S. citizen, Hand was born a British citizen in Pakistan and graduated first in his class with highest honors from Bristol University in the United Kingdom. After graduating with honors from the University of Chicago MBA program, he worked as a consultant in London for about a year. Hand then decided he wanted to be a professor and returned to the University of Chicago to earn his doctorate in record time. He taught at Yale and Chicago before he joined UNC Kenan-Flagler in 1993.

Hand enjoys teaching students in all of the School’s degree programs and executives in the Finance Analysis for Non-Financial Managers Program at UNC Kenan-Flagler.

“I view being a business school professor as a big privilege because you basically wake up in the morning and say, ‘What do I want to do today?’” Hand said. “And there aren’t too many professions where that’s the case. My colleagues and I work hard because we’ve been given this privilege.”

And students and faculty have taken notice of his passion for teaching and research.

Another nomination said that Hand “wins over his students with his dry sense of humor, his patience and the way he smiles and bounces a bit when he talks about his family or tells us to do the whale. After taking my first class with this professor, he made me want to be an accountant. He was inspiring, informative, funny and warm.  I feel lucky to have had a class with him.”

Hand is humble about his methods.

“Everyone has a shtick when they teach. You have to teach however you think is the best way to communicate. I’ve enjoyed trying to engage my students,” he said. “I don’t think my method’s anything special; I’m fairly energetic in the classroom.”

Hand joined UNC Kenan Flagler in 1993, at a time when the accounting department was in the process of rebuilding.

“I really love my colleagues here. We’ve got a super group of very talented researchers and teachers,” Hand said. “We’re one of the top groups in the country, so it’s been fun to be part of that.”

“John is the ultimate team player,” said Jana Raedy, associate dean of the MAC Program.  “He’s very selfless and works for the benefit of the group.”

That commitment to the greater good is valued by his colleagues, as exemplified recently when he stepped in to solve a logistics snafu for MAC students.

“On the first day of the program, John personally manned the barrier to the parking deck to let new MAC students in when he found out they had not yet received student IDs that would allow them access to the parking deck,” said accounting professor Eva Labro.

“John stood at the gates for well over 30 minutes letting students into the parking deck. It wasn’t John’s problem, but he saw a problem and he stepped in to fix it,” said Maydew. “That kind of selflessness is one of many reasons why I am honored to call John a colleague and friend.”