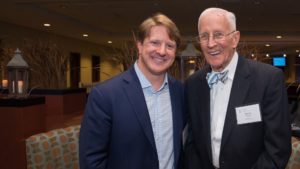 Jeff Tucker (MBA ’00) has a plan to help UNC Kenan-Flagler meet its aggressive goal to raise $400 million for the Campaign for Carolina. The name of that plan is The Rollie Tillman Jr. Development Fund.

Tucker created the fund and seeded it with initial capital, with the idea of attracting additional donations over the coming years. Named in honor of Professor Rollie Tillman Jr. (BSBA ’55) to benefit UNC Kenan-Flagler’s fundraising efforts and better serve the School in meeting future challenges, it is the first of its kind at Carolina.  Specifically, the fund helps the School attract and retain fundraising professionals so that it can continue to provide an excellent education to business students and also propel UNC Kenan-Flagler even farther.

Tucker is managing director and chief operating officer of Century Bridge Capital, a private equity firm based in Beijing and Dallas focused on investments in China. At UNC Kenan-Flagler, he serves as chair of the development committee for the School’s Board of Advisors and formerly served as chair of the Alumni Council and as a member of the International Board of Advisors. He also serves on the Chancellor’s Global Leadership Taskforce.

Within the next three to five years, Tucker hopes to see the Tillman fund reach $10 million in principal value, enabling the School to significantly increase the number of development officers on staff.

Tucker named the fund for Tillman, who has been deeply committed to UNC since he was an undergraduate student. From 1957 until his retirement in 2003, Tillman served UNC in a number of influential roles, including general college advisor, director of the full-time MBA Program and founding director of the Frank Hawkins Kenan Institute of Private Enterprise.

In his role as vice chancellor for university relations, the fundraising arm of the University, Tillman’s innovations were responsible for a major increase in University contributions. In that same innovative spirit, the fund created by Tucker also will help create major growth in contributions.

“Above all else, Professor Tillman has been an inspiration to thousands of UNC Kenan-Flagler students,” says Tucker. “I’m one of his incredibly grateful former students who has benefitted immensely from his guidance, wisdom and good humor over the years, so it gives me great pleasure to name this fund in his honor.”

“UNC Kenan-Flagler relies more heavily on private support than ever before – it is the key differentiator between a good business school and a great one,” says Dean Doug Shackelford (BSBA ’80). “Through the Campaign for Carolina, the School must grow our philanthropic base of support to continue to provide an excellent education for our students and attract the world’s top faculty. The Rollie Tillman Jr. Development Fund gives us the resources to meet this critical need and, ultimately, realize our vision of becoming the best business school of the 21st century.”

“It is my sincere hope that The Rollie Tillman Jr. Development Fund will help ensure that many future generations of UNC Kenan-Flagler students have the same educational opportunities that I have been so fortunate to experience,” adds Tucker. “It is also my hope that we can attract significant additional donations to the fund. Giving to the Tillman Fund offers donors the opportunity to see the value of their donation multiply over time, as each dollar donated will go to hiring more people to help us raise more money for the School.”

Anyone may contribute to The Rollie Tillman Jr. Development Fund. Make a gift now.