Skip to content Skip to Programs Navigation
Jeff Saturday: Leading on and off the field

Jeff Saturday: Leading on and off the field 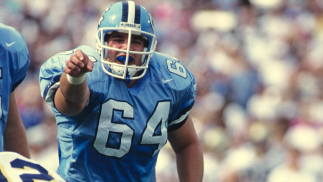 Jeff Saturday always knew his place on the field.

The former starting center for the Indianapolis Colts, who started his career at UNC, played alongside quarterback Peyton Manning for 13 years – a position that taught him the importance of staying within the confines of the role his team needed him to fulfill.

“I often had to listen to the authority, the quarterback, in my game,” he said. “That was my role as a teammate. At times we would battle about what that was, but he was the authority – I would have to follow through with it.”

That lesson was one of several that Saturday (BSBA ’97) outlined in his Dean’s Speaker Series talk on Nov. 17 – lessons that can be taken from football and applied to personal and professional lives, he said.

“The game of football translates to business or any other aspect of your life like no other sport will,” Saturday said. “You have 53 guys with one common goal, and everybody has to lay aside what may be their interests for the greater good.

“The company is strongest when everyone is in their own role.”

Saturday, who joined ESPN as an NFL analyst after retiring from the league last year, said he ended his 14-year career having acquired “pillars of leadership” skills, including understanding the importance of setting attainable and effective goals.

Saturday stressed the importance of communicating those goals to every member of the team to ensure that everyone was headed down the same path.

“I know a good leader when I see everybody who’s following him is speaking the same language he is,” Saturday said. “If I see one guy cast his vision, and then I see a quarterback cast his vision and it’s different, I know they’re going nowhere.” He paused. “They’re going to be the Oakland Raiders.” 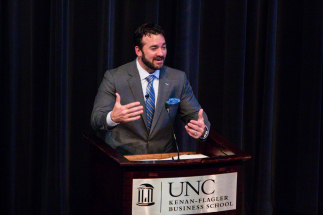 Saturday peppered his talk with stories from his career, using a memorable come-from-behind victory over the New England Patriots in a 2007 championship game to explain the importance of learning to “survive the storms.”

In that game, when the Colts trailed 21-3 at halftime, head coach Tony Dungy grabbed each player individually to remind him that it was “still our time” to score and get back in the game. “If we survived this storm, they wouldn’t have the guts to finish this off,” he said. The Colts won the game to advance to the Super Bowl.

And the way you deal with failure will determine where you go in the future, he said. “The minute we believe that failure identifies us as people, we quit.”

“Take the risk” and don’t be afraid of failure, said Saturday, noting that he “forged more in failure than in any success I’ve had.”

Saturday is happy in his current role at ESPN and he’s reached a point where his “family is the No. 1 goal,” though it’s something he’s worked to balance with his professional life all along.

“That is a key of all keys in life: Chalking the boundaries of what you’re willing to do and not do,” he said. “You have to create the space where you live, so if being home for dinner with your family every night is important, you have to build your schedule so you can be at home with your family.”

Saturday ended his talk with two pieces of advice for students beginning their careers:

When Dean Douglas A. Shackelford introduced Saturday to the packed audience in Koury Auditorium, he said that the former Carolina football player Saturday had been introduced at the UNC Homecoming football game to “thunderous applause.” Saturday said his oldest child celebrated his 14th birthday that day and being back in Chapel Hill felt like coming back home. “I came to UNC as a boy and left here as a man,” he said. “I’m appreciative of the education I got here and proud to be a Tar Heel.” The evening ended with the traditional “vote of thanks” from Dick Blackburn, one of Saturday’s UNC Kenan-Flagler professors and now associate dean of the Undergraduate Business Program.

Read more on Saturday at GoHeels.com.