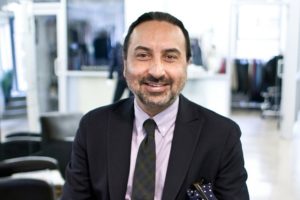 Jaggi Singh (MBA ’90) emerged from the recession determined to cut two words from his life: licensing and leasing. During more than 18 years as a licensee of multiple fashion labels – including Kenneth Cole, Nicole Miller and Alexander Julian – he produced and marketed outerwear for various brands, paying each an annual royalty fee to do so. Over the years, those fees added up to millions of dollars and he recognized the benefits of buying a brand and being a licensing source.

“I’d rather be on the side where I can collect checks instead of writing them,” says Singh.

The recession gave him that opportunity. He was working with Members Only, the brand of iconic jackets that debuted in the 1980s, when the recession bankrupted its owner. Singh saw the potential for the brand to make its mark in today’s fashion world. He bought the brand and, with the help of his designer, sales rep and operations expert, revitalized it.

“The first hurdle for any brand is to be recognized,” says Singh. “Everybody knows the Members Only name, so we started out ahead and now we’re making the product relevant for today.”

Singh has expanded what had been primarily a men’s brand to reach women, too. The brand offers 30 styles for men and 50 for women. Singh targets a young demographic, as well as the nostalgic buyer who remembers the Members Only cachet from 30 years ago. He’s expanding the product line to other classifications – such as sportswear, shoes, denim and fragrances – and has also signed accessory licenses. He’s also penetrated the international market by putting efforts into reaching customers through his website, targeting younger buyers who are comfortable shopping online and making brick-and-mortar stores less relevant.

“It’s always scary to start or restart a business during a downturn,” he says. “But it has some advantages. We were able to get office space, hire employees and set up overseas production at favorable rates. And retailers were not doing well, so they were looking for something new and different to sell.”

Singh, who came to Chapel Hill from his native India to pursue his MBA at UNC Kenan-Flagler, says that of the many benefits he’s derived from his education, he most values learning how to network.

“I would not have been able to deal with some of the top companies and brands in America,” he says. “UNC Kenan-Flagler gave me that edge and the comfort level to assimilate and work in the U.S.”

This article originally appeared in the Fall 2013 issue of UNC Business magazine. View the issue in its entirety here.