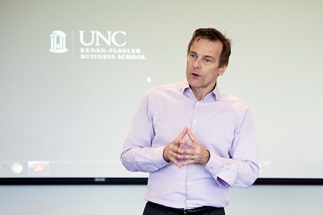 Long before Dutch-born Jan-Benedict E.M. Steenkamp came to America as a marketing professor, America came to him – or rather, to his parents.

His mother ate tulip bulbs to survive the “Hunger Winter” of 1944-45 in Amsterdam before American and Allied forces liberated the country from its Nazi occupiers. His father, a leading Dutch politician from the 1960s through the 1990s, founded the Christian Democratic Party which ruled the country for most of the last half century – and that landed him on the Soviet Red Army’s hit list at the height of the Cold War.

“My parents raised me as a child with deep appreciation and gratitude toward the United States,” Steenkamp says. “Neither my father nor my mother were under any illusions about what stood between their freedom and the Russians: the American soldiers in West Germany. During the Tet Offensive in 1968, we prayed for the American soldiers in Vietnam.”

Steenkamp’s life and career have been shaped by both his family and the history and economics of the time in which he was born.

Steenkamp, the Knox Massey Distinguished Professor of Marketing at UNC Kenan-Flagler since 2006, is now one of the world’s most-cited marketing scholars and an authority on how brands can compete successfully in the global economy.

“That I went to marketing rather than finance,” he says, “was actually a throw of the dice.”

After finishing his research master of science degree at the Netherlands’ Wageningen University in 1983, he had two options: Pursue a PhD in finance or marketing. He was interested in and had studied both, but Wageningen – the world’s No. 1 agricultural university – focused heavily on math and science. To get into the school, he had focused heavily on math and statistics. Not surprisingly, for his PhD, he had applied for funding for a dissertation in finance.

But in 1983 the Netherlands, like much of the world, was in a deep recession. Unemployment in the Netherlands was at 14 percent, and Steenkamp was worried. A position came open at Wageningen to teach marketing and, with the finance dissertation funding uncertain, he applied for it.

Thus was born a marketing professor. It was perhaps another roll of the dice that helped Steenkamp be so successful. Marketing scholarship has become increasingly quantitative, with statistical analysis of large datasets becoming more important. Steenkamp’s finance and quantitative background equipped him well for that.

“While the discipline of finance might have lost a superb scholar, the marketing area won the lottery,” says Jennifer Conrad, Dalton McMichael Distinguished Professor of Finance and former senior associate dean for academic affairs. “UNC Kenan-Flagler is incredibly fortunate to have attracted and retained J.B. Steenkamp. His scholarship is among the best in his field; his teaching is superb.  And he continues to help us build an excellent marketing area.”

Steenkamp has written four books on international marketing. “Brand Breakout: How Emerging Market Brands Will Go Global” was named a best business book in 2013 by PwC’s Strategy + Business magazine and praised by The Economist and Financial Times. “Private Label Strategy: How to Meet the Store Brand Challenge” has become the standard work in the field and was translated into Chinese, Portuguese, Polish, Spanish and Russian. “Global Brand Strategy: World-Wise Marketing in the Age of Branding” is designed to help managers of global brands — or those who want to manage them — understand how to create value in many markets around the world. “Retail Disruptors: The Spectacular Rise and Impact of the Hard Discounters” examines the biggest disruption in grocery retailing in half a century.

His books focus on real-world business issues rather than purely abstract academic matters, and they represent how Steenkamp has approached research throughout his career.

“I was interested in writing articles which were inspired by managerial problems, but then try to look at the underlying currents, look at some of the more major developments, so as to help businesses reach better decisions,” he says. “You don’t want to pursue the latest fad, but you try to create insights that help business. Practical problems do really excite me a lot.”

In his fifth book, Steenkamp examines how 16 leaders confronted life-changing dilemmas and made decisions that changed the course of history. “Time to Lead: Lessons for Today’s Leaders from Bold Decisions that Changed History” provides lessons from leaders who span 2,500 years and come from China, France, Germany, Great Britain, Greece, Israel, South Africa, Spain and the U.S. History has been his passion “as long as I have been able to read,” and his greatest mentor on leadership was his late father.

Steenkamp is the founder and executive director of AiMark, a nonprofit center that connects academics and companies to advance global marketing knowledge. He also is a fellow at Fudan University’s Institute for Sustainable Innovation and Growth in Shanghai and an honorary professor at the European Institute for Advanced Studies in Management.

Though a prolific and accomplished researcher – his work has been cited over 50,000 times in other academic studies and he was ranked No. 1 in the world in scholarly influence on marketing – Steenkamp has stayed close to his roots as a university teacher. He has taught at 10 universities in nine countries and been recognized numerous times for his teaching and mentorship.

Teaching is an opportunity to deepen his own understanding and share his research with students who will often be moving into decision-making roles once they graduate, he says.

“As faculty, we have a responsibility to do research and to disseminate it, the latest insights, to the students,” he says. “I find teaching fulfilling. It forces you to think more deeply about the material – you cannot teach something you do not deeply understand.”

That’s especially true when students bring their own experience into the classroom.

“I particularly enjoy teaching Executive MBA students at UNC Kenan-Flagler since they have extensive work experience and, as such, can ask the most challenging questions,” he says.

Steenkamp has received numerous teaching and research awards at UNC Kenan-Flagler, including the Weatherspoon Award for Excellence in Research and the Research Mentoring Award. In addition to the individual awards and recognition he’s received, perhaps his proudest honor was winning the Dr. Hendrik Muller Prize in 2005.The award is given every two years by the Royal Netherlands Academy of Arts and Sciences for exceptional achievements in the area of behavioral and social sciences. Steenkamp was the first researcher in the field of business to receive the prestigious award, which recognizes the entire body of his work.

Steenkamp has done all of this while also serving as marketing area chair at UNC Kenan-Flagler since 2006, working to strengthen the work of the marketing faculty.

“I strongly believe in continuity in leadership and the consistency in performance criteria it provides,” he says. “I am passionate about improving the quality of the marketing group.”

Ask him what else he’s proud of and he mentions his children – his daughter is a PhD student in marketing at London Business School, one of his sons is an investment manager in London and the other studies mechanical engineering at the Technical University Delft in the Netherlands. He also mentions his American wife, who he calls “America’s greatest treasure.”

In addition to his contributions at UNC Kenan-Flagler, America got something else from this Netherlander who has admired the U.S. since he was a child. In May 2016, 71 years after the Allies liberated the Netherlands, Steenkamp interviewed to become a U.S. citizen. He passed the test.

A decade after coming to UNC, Steenkamp became a U.S. citizen.