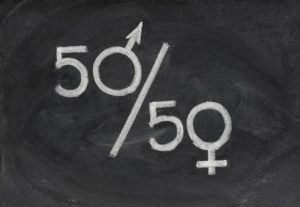 When Patricia Arquette received an Oscar for her role in “Boyhood” in 2015,  she dedicated the award to American women: “It’s our time to have wage equality once and for all and equal rights for women in the United States of America.“

Whether in Hollywood or the corner office, disparities continue for men and women in the workplace. Although women now constitute nearly 47 percent of the U.S. labor force, they represent only 4.6 percent of CEO positions in Fortune 500 companies.

While some factors – such as low–paying occupations have high female representation – could be partly responsible for the aggregate gender differences in earnings, the wage gap persists even within the same job. And even though women are more likely than men to temporarily exit the workforce when they become parents and later re-enter when their children grow older, research suggests that this pattern is insufficient to explain fully the wage gap.

I believe that one of the reasons why gender disparities exist in the workplace is because of unconscious biases that stem from our experiences in our personal, non-work spheres. This is especially true of well-intentioned men in traditional marriage structures.

Using data from a national survey of attitudes, my colleagues and I found that men married to women who do not work outside the home tend to have negative views about women’s participation in the workforce. For instance, they are less likely to promote female employees and less likely to find organizations with female leaders attractive.

Other researchers have found:

Gender equality is a key contributor to the economic growth of a country. Paying women subpar wages in the face of mounting childcare expenses will keep them out of the workforce, hindering a nation’s economic progress.  And more importantly, ensuring women’s participation in a nation’s economy will result in empowerment of women in their familial roles, which will ultimately result in the creation of a better balanced society.

Let’s acknowledge that inequities still exist and resolve to end them.