It’s the weekend! Why are you working? 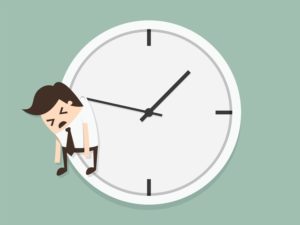 If you are like us, you often find yourself working on weekends and are criticized by somebody (your spouse, a friend, a colleague) who thinks there is something inherently wrong in spending some time over the weekend on work-related activities. Do they have a point? We thought there might be some truth to their criticism. And since we are scientists, we’ve looked for empirical data that would help us understand this phenomenon (and ourselves).

What we’ve found is that many of us work on weekends for a very simple reason: We enjoy it. Think of it as a productivity high. But research shows that we often overdo it and that it may be more costly than we realize. Let’s dig a little deeper into the data.

One reason so many of us work on the weekend is that we receive pleasure from feeling productive. In a recent study, one of us (Francesca) asked a group of over 500 employed individuals to think about and describe one of four experiences: A time when they felt productive at work, very busy, unproductive or not busy at all. When people wrote about a time when they felt productive, they reported feeling at their best and happy with life — more so than in any other condition. It is by feeling productive, these data suggest, that we believe we are making some sort of a difference in the world.

But research also suggests another answer to the question of why we work when we’re supposed to be taking it easy: We tend to forego leisure in favor of working and earning beyond our needs. In a series of laboratory studies, Christopher K. Hsee of the University of Chicago and his collaborators showed this was true even when they eliminated possible reasons participants could use for overearning, such as uncertainty about the future and a desire to pass on money to others.

The participants were divided into two groups: High earners and low earners. High earners earned chocolate for listening to the noise for fewer times; low earners had to listen to the noise more often to earn a piece of candy. The results? The high earners, on average, earned nearly three times more chocolate than they could actually eat within five minutes. Additionally, high earners chose to earn more chocolates than they estimated they would be able to eat within five minutes. In other words, they voluntarily subjected themselves to pain to earn more candy than they believed they would eat and, as a result, would have to give back.

There were no differences in the number of times high earners and low earners listened to the piercing noise, so only the high earners ended up overearning. Low earners acquired less chocolate than they estimated they could consume. What these results suggest, the authors conclude, is that people will try to earn as much as they can, regardless of their pay rate. Their desire to earn is not based on how much they want or need, but on how much work they can perform or withstand.

Now, you may be thinking that for many people, work isn’t painful. It is certainly true for us (at least on most days). As long as you love what you do, what’s the problem with working on the weekend?

One of us (Brad) conducted research in collaboration with Hengchen Dai and Katherine Milkman (both of the Wharton School of Business) and Dave Hoffmann (of the University of North Carolina) to examine the potential drawbacks of draining our cognitive resources by working too much. Using three years of data from 4,157 caregivers in 35 U.S. hospitals, the team found that hand-washing compliance rates dropped by an average of 8.7 percent from the beginning to the end of a typical 12-hour shift. The decline in compliance was magnified on days when a caregiver’s work was more intense (e.g., when he or she saw more patients). Just as the repeated exercise of muscles leads to physical fatigue, repeated use of cognitive resources produces a decline in an individual’s self-regulatory capacity. More time off between shifts appeared to restore workers’ executive resources: They followed hand-washing protocol more carefully after longer breaks.

Demanding jobs have the potential to energize and motivate employees, but the pressure employees face may make them focus more on maintaining performance on their primary tasks (e.g., patient assessment, medication distribution) and less on other tasks, particularly when they are fatigued. For hospital caregivers, hand-washing may be viewed as a low-priority task, leading them to diverge from hand-hygiene guidelines as the workday progresses.

In fact, depleting our cognitive resources can make it more difficult for us to follow our moral compass. In a series of studies one of us (Francesca) conducted, when participants’ cognitive resources had been depleted, they were more likely to cheat and behave dishonestly on a variety of tasks as compared to those in a control condition.

Our passion for our work and the pleasure we gain from feeling productive may explain why we so often work on the weekend, but we still need to be sure to make time to recharge. Tony Schwartz, CEO of the Energy Project and author of the book “The Way We’re Working Isn’t Working,” offers some good advice on this point: Applying “fierce intentionality” to all that we do can benefit both our work and personal lives. When you’re working, make sure you’re really working; and when you’re renewing, make sure you’re really renewing.

This post originally appeared on HBR.org and has been posted with permission. View the original post here.