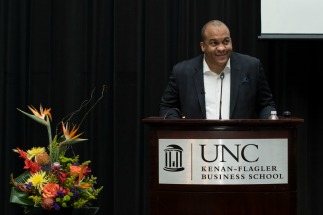 The National Basketball Association is excited about one of its hottest prospects: the 22-team NBA Development-League.

The NBA D-League is the official minor league system of the NBA – comparable to baseball’s 100-year-old Farm System – and the fastest way to get to the NBA.

Overseeing both the business and basketball operations for the NBA’s newest and fastest growing property is Malcolm Turner (BSBA ’98), NBA D-League president.

The D-League is in its 16th season and ranked No. 2 in the world.

“We are a young league, but by any measure we are catching up and closing in fast. As a matter of structure, we’re owned by the NBA – and while far from a startup, we’re very clearly an emerging growth property within the NBA portfolio,” says Turner.

“This is a fun, exciting property that has grown a lot so quickly,” he says.

Turner is no stranger to the business of sport. Before joining the NBA family, he worked at Wasserman Media Group as the managing director of its golf division. He also worked as senior vice president of OnSport, a North Carolina-based sports and entertainment consulting firm, and managed the event marketing and activation for PGA Tour Championship events as a tournament official. A career in sports has always been Turner’s goal since he worked on independent projects as a UNC Kenan-Flagler undergrad.

Turner quoted Vinod Khosla, saying, “Success comes to those that dare to dream dreams and are foolish enough to try and make them come true.”

Turner has big dream dreams for the D-League. His envisions it as much more than a practice team for players trying to make it to the professional circuit. Investing in the D-League makes good business and basketball sense for the NBA as a whole, he says.

The D-League offers unparalleled player development. “Players develop at different rates, and not everybody is NBA ready on day one,” says Turner. “The D-League is focused on creating strong, core rotational players.”

Hassan Whiteside and Danny Green both rose from the ranks of the NBA D-League, which offers players a number of options for transitioning up to the NBA. Plays can be called up from the D-League on a 10-day contract, which can be renewed. They can also be assigned to a specific D-League team for development, as UNC basketball player Marcus Paige (BA ’16) has.

Coaches and referees also use the D-League to develop their skills. Four NBA head coaches and 32 NBA assistant coaches built up experience in the D-League – and every referee working at the NBA level has worked in the development league.

Turner’s foremost goal is developing 1:1 affiliations between D-League teams and the 30 NBA teams. The number of affiliated teams is expected to grow to 25 in the 2017-18 season with the addition of the Charlotte Hornets, Long Island Nets and Windy City Bulls.

“Therein lies our number one strategic priority – the so-called goal of 30 for 30. Each of our NBA teams will be affiliated with a D-League team,” he says.

The challenge is finding attractive real estate and nearby markets close to NBA affiliates. The average distance between a D-League team and its affiliate used to be 560 miles, but that number has since been reduced to 180 – and the goal is to reduce that number even more.

While not a startup, the D-League is a place where the NBA can innovate in the game of basketball. Turner describes the league as a “learning lab” and a place where the NBA can experiment. In 2015 it tested a “coach’s challenge” rule allowing basketball coaches to challenge a referee’s call. In 2016 the league experimented with the number of referees and gave them mouthpieces so they could talk to each other. The league has also tried out business technology like Keemotion to automate television production for games.

Overall, the D-League is developing into an identity of its own. In an exciting partnership with Gatorade, the league will be called the G-League for its upcoming coming seasons.

Turner has great hope for the league’s future.