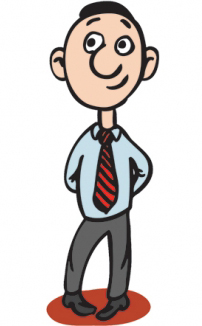 But there are more introverted leaders than you might expect. David Hofmann, Hugh L. McColl Distinguished Professor of Organizational Behavior and Senior Associate Dean for Academic Affairs at UNC Kenan-Flagler, wanted to find out how both styles work.

Hofmann surveyed 70 managers and 374 employees of pizza delivery franchises that are all part of one company. He asked managers to rate themselves on a scale of one to five on such descriptors as introverted, bold, reserved, and talkative. He asked employees to rate behaviors found in their workplaces. For instance, did fellow employees try to improve work procedures, correct faulty practices, solve problems? Did they feel free to communicate their opinions? Then Hofmann looked at each store’s profitability over seven weeks, controlling for things such as store location and size. (A larger store near a college campus would obviously do more business than a pizza joint in the middle of nowhere.)

Hofmann found that extroverted leaders were successful, operating highly profitable stores, but only if their employees were team players who didn’t try to change things or offer ideas. Conversely, stores were also profitable if they had introverted leaders who were willing to listen to their extroverted employees. The least profitable stores were those with introverted leaders and passive employees. Hofmann expected that. But stores also faltered when both managers and their employees were extroverted. “We thought there must be a power struggle in those stores,” Hofmann says. “We assumed leaders were not accepting suggestions from employees. And that would have a negative effect on motivation and commitment to their leader. But we didn’t know that for sure.”

So Hofmann’s team, which included professors Francesca Gino of Harvard and Adam Grant of Wharton, set up an experiment. It involved 163 UNC students divided into dozens of teams with assigned leaders. Their goal: to fold T-shirts like a GAP employee as fast as they could. The prize for winning: iPods.

But before the folding commenced, half of the leaders were told: Scientific research now shows that behaving in an extroverted manner is the key to success as a leader. Like John F. Kennedy, Martin Luther King Jr. and former General Electric CEO Jack Welch, great leaders are extroverted: their behavior is bold, talkative, energetic, active, assertive, and adventurous. They communicate a strong, dominant vision that inspires followers to deliver results.

The other team leaders were told the opposite: Scientific research now shows that behaving in an introverted manner is the key to success as a leader. Like Mahatma Gandhi, Abraham Lincoln, and Socrates, great leaders are introverted: their behavior is quiet, shy, reserved, and unadventurous. This enables them to empower their people to deliver results.

The researchers then planted two confederates on each team. These two individuals offered a suggestion halfway through the folding exercise, saying, “I wonder if there’s a faster way to do this.” And the other confederate would answer, “I have a friend in Japan who says they have a much faster way of folding T-shirts. I think there’s a video on YouTube.”

“There’s a lot of empirical evidence that suggests extroverts will emerge as leaders,” Hofmann says. “And extroverts are more likely to be seen as leaders. But I think we’ve shown that that’s not the only way to lead. Quiet leaders can really be effective, too.”

There are some good examples—most you’ve never heard of. Because, well, they’re introverts. But you’ve heard of at least one. “Bill Gates,” Hofmann says. “I’d say he’s introverted. He’s surrounded himself with really smart, proactive employees whom he seems to listen to. And I’d say he’s created a fairly successful business.”