In the bank and in your head 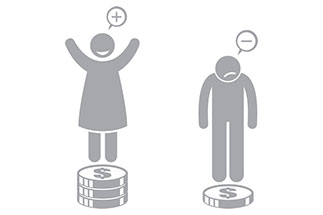 Attitudes about the economy and how people view themselves have a direct impact on personal financial outcomes, according to new research by Camelia Kuhnen.

People with higher levels of self-efficacy are less likely to experience financial distress – and when they do, they are less likely to miss payments or default on debt, she shows in her research. For those who grew up in lower income families, the effect is especially strong.

Kuhnen writes about her findings with Northwestern University’s Brian T. Melzer in “Non-Cognitive Abilities and Financial Delinquency: The Role of Self-Efficacy in Avoiding Financial Distress.”

Analyzing how socioeconomic status influences optimism about macroeconomic conditions and, in turn, predicts how likely people are to invest in stocks and make major purchases is the subject of a second study. Kuhnen co-authored “Socioeconomic Status and Macroeconomic Expectations” with the University of Michigan’s Sreyoshi Das and Stefan Nagel.

Neither study suggests that a positive attitude or optimism – by themselves – are the only keys to financial success. But they link specific traits and outlooks to behaviors that help people endure financial hardship and accumulate wealth over the long run.

Self-efficacy is a non-cognitive skill. It is an individual’s expectation that he or she can influence future outcomes through efforts in the present.

Higher self-efficacy corresponds to better outcomes in education and labor market success, according to others’ research. Kuhnen and Melzer hypothesized that people with higher self-efficacy would have better financial outcomes, too.

To test their thesis, they used data from the National Longitudinal Survey of Youth (NLSY), tapping information collected from more than 6,000 people aged 21 to 41. They also tapped another set of NLSY survey data that includes information about adults aged 47-56.

Sure enough, people who scored higher on self-efficacy when they were younger were more financially successful and resilient as adults, says Kuhnen.

Their data showed that people with higher self-efficacy were less likely to:

In addition, they were more likely to:

Even when individuals with higher self-efficacy experience financial shocks, such as job loss, they were less likely to fall behind on bill payments or default on debts.

The effects persisted even when the researchers adjusted the data for the impact of net worth, family support, education levels and other factors.

One of their most striking findings was that individuals who grew up in Iower-income families experienced greater benefits from self-efficacy than those from wealthier backgrounds.

“I think about self-efficacy as a personal resource,” Kuhnen says. “It can help you compensate for lack of other resources, such as wealth.”

It turns out that what people think about themselves isn’t the only factor that influences their financial decisions. What they believe about the economy is also important.

The difference that socioeconomic status makes

In “Socioeconomic Status and Macroeconomic Expectations,” Kuhnen and her colleagues took a deep dive into 34 years of data from the Michigan Survey of Consumers, frequently cited as a source for consumer confidence data. About 400 randomly selected individuals complete the survey – which collects socioeconomic data – each month.

Kuhnen and her co-authors wanted to know whether socioeconomic status (SES) – education and income – affected how optimistic people were about the economy and how likely they were to behave in certain ways, such as investing in stocks.

In recessionary periods, though, the optimism gap between people of higher and lower SES declined.

The difference in outlook, Kuhnen and her co-authors say, is due, in part, to:

But as the economy emerges from recession, the optimism of people high-SES individuals rises faster than their low-SES peers.

Differences in wealth and opportunity could explain some of the behavioral differences between high-SES and low-SES individuals. People with more money are more likely to invest, for example. While that’s true, that’s not the whole picture.

“Fifty-one percent of the people in this country don’t have a penny invested in equities,” Kuhnen says. “For some families, it’s probably because they don’t have any money to save. But it cannot be that half of American households don’t have a dollar to save. They just choose not to save it in equities.”

To estimate how much of the behavior gap between high- and low-SES individuals was due to beliefs – rather than “direct” factors like wealth – the researchers analyzed their data in two ways. A conservative estimate, points to around 10 percent of the difference being a result of beliefs about the economy, says Kuhnen.

The lesson for from these studies is clear: Individual beliefs play a significant role in how people behave and in what level of financial success they have.

Economists and forecasters looking at consumer confidence data should keep in mind the biases of different groups. Educators, parents and others who work with children should consider ways to strengthen self-efficacy.

“Some people miss out on good outcomes because they view the world as having bad outcomes that are not under their control,” Kuhnen says. “As an economist, I say ‘Wow, that’s too bad, because they could help with economic growth.’ But as a person or a parent, I say ‘It’s unfortunate to have human talent unused because people are too pessimistic about what they could achieve.’”