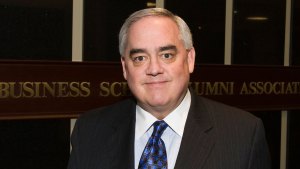 Born in Burlington, North Carolina, in 1949, he served in the 101st Airborne during the Vietnam War and received the Bronze Star, Air Medal and the Army Commendation Medal for Valor. In 1970, he married Rebecca Burch, who predeceased him in 2013.

He began his career as a CPA for Haskins & Sells in Greensboro, North Carolina.

Ezzell and his family relocated to Arlington in 1986 where he went on to lead the legislative and regulatory activities for Deloitte LLP until he retired in 2012. He worked closely with the accounting profession and Congress on enactment of the Sarbanes-Oxley Act of 2002 and the Wall Street Reform and Consumer Protection Act of 2010. 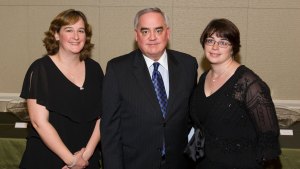 Bill Ezzell with his daughters, Julie and Jennifer

From 1998 through 2004, Ezzell was a member of the board of directors of the American Institute of Certified Public Accountants (AICPA) and served as its chairman from 2002-2003. As chairman he focused on restoring credibility to the accounting profession and emphasizing the profession’s core values of objectivity, integrity and independence.

He served on the board of trustees of the AICPA Foundation and was its president from 2006-2009. Under his leadership the AICPA Foundation developed a program to support an incremental increase in the number candidates seeking PhDs in accounting and tax. In 2009 he received the AICPA’s Gold Medal for Distinguished Service to the Profession. During his retirement he continued to support the academic community.

Throughout his career, he was a fierce advocate for the CPA profession, especially for students on the pathway to becoming a CPA and the educators who teach them.  Read more about Ezzell in his obituary.