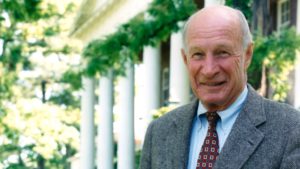 Born in Raleigh in 1929, he graduated from UNC-Chapel Hill, where he received his bachelor’s degree in journalism. He was editor of The Daily Tar Heel and a member of Phi Beta Kappa and the Order of the Golden Fleece.

After college, Jenrette joined the U.S. Army as part of the Intelligence Corps and served during the Korean War. After the war, he returned to Raleigh where he briefly became a life insurance agent before he earned his MBA at Harvard Business School in 1957.

He worked for the brokerage firm Brown Brothers and Harriman until 1959, when he co-founded Donaldson, Lufkin and Jenrette, an investment banking firm that prospered under his leadership. Equitable Life Assurance Society acquired the firm in 1981. Jenrette became chief executive officer of the Equitable and is credited with saving the company from impending financial collapse. He retired from the firm in 1996 to wide acclaim for his role as a statesman of business.

Outside the realm of business, two of Jenrette’s chief interests were UNC-Chapel Hill and historic preservation.

At UNC Kenan-Flagler, he generously established the Richard H. Jenrette Fellowship Awards in 1986, one of the most prestigious awards presented by the full-time MBA Program, recognizing students of outstanding leadership, academic performance and potential for successful careers in business.

He also created the Richard H. Jenrette Business Education Fund to provide support for teaching and research activities at UNC Kenan-Flagler. He was one of many donors who joined together to create The Macon G. Patton Distinguished Professorship, which is held today by finance professor Paolo Fulghieri.

UNC awarded him an honorary Doctor of Laws degree in 1998. Jenrette also served on the University’s Board of Trustees and was largely responsible for the renovation and restoration of Old East and Old West as part of the Bicentennial observation.

He restored over 13 homes during his 50-year history of preservation, including Ayr Mount in Hillsborough, North Carolina; Edgewater at Barrytown, New York.; Roper House in Charleston, South Carolina; and Millford Plantation near Sumter, South Carolina.

His collection of homes is considered one of the finest collections of classical architecture in this country. He created Classical American Homes Preservation Trust and the Richard H. Jenrette Foundation to preserve his seven properties, collections and surrounding landscapes for the future.

Read more about Jenrette in The New York Times and The News & Observer.