Imagining – and discovering – the possibilities

Lewis Burton (BSBA ’65) grew up watching the Atlantic Coast Line Railroad pass near his home in Fayetteville, North Carolina – and imagining where it might carry him one day.

The train traveled the length of the Eastern Seaboard. “I would watch people catch the five o’clock to New York or wherever they might be going, back and forth,” he recalls.

Burton’s father, Sippio Burton, owned and operated a barbershop in town, and many of his clients were soldiers stationed at Fort Bragg. Burton began working in the shop when he was 10, and listened in on the conversations of servicemen from faraway places.

The allure of exploration took hold. “I realized that if I wanted to do something in life, I needed to go someplace that was different, to experience different things. I was ready to strike out on life’s journey, to find new possibilities,” says Burton.

His father wanted him to attend Hampton University, a historically Black college, but Burton had a different destination in mind. He wanted to attend UNC. His mother, Sadie Burton, concurred and they prevailed. He arrived in the fall of 1961 and, in short order, found himself at home.

Carolina was where Lewis Burton belonged. He went on to earn a BSBA with a major in accounting, a semester ahead of schedule.

A pioneer in our history

Seven Black students had preceded them, but Burton says he gave it little thought. He felt he could best effect social change by developing strong relationships with his classmates. He organized intramural athletic activities, an appointed position, and participated in Student Government, an elected position. 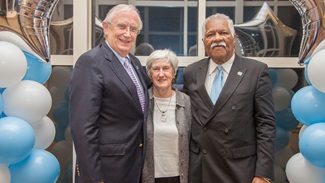 He became good friends with a member of his study group, Coleman Ross (BSBA ’65), who went on to provide accounting services for financial services clients at PricewaterhouseCoopers for 34 years and served as the national leader of PwC’s insurance practice. In 2018, Ross established the Lewis M. Burton Master of Accounting Fellowship to honor his classmate and his legacy of courage, leadership and sacrifice.

Burton had arrived well prepared. Sippio and Sadie Burton encouraged an exploration of interests – history, heritage, music – in their children. He recalls a performance by the classical singer and civil rights activist Marian Anderson in Fayetteville as an occasion for great excitement in the Burton household.

But perhaps most importantly, Sippio Burton instilled in his son an appreciation of the importance of nurturing relationships. When he left home for Carolina, his father gave him a copy of Dale Carnegie’s book “How to Win Friends and Influence People.” It served the young man well. He made friends easily, organized intramural events and was elected to the student council. But his studies came first.

“I was most impressed with his sense of order and discipline and how he managed his time,” says Larry Poe (BSBA ’65), a retired two-star U.S. Navy admiral. “He had the ability to focus and that attentiveness isn’t something that you can learn. His leadership was self-evident back then and proven in his career.

Initially Burton had no notion of what he wanted to major in. “But soon after I got there, I overheard this conversation about how ‘accounting is really hard; it’s tough,’” he says. “And I said to myself, ‘Okay; that’s what’s meant to be.’ And that’s how I made the decision.”

He benefitted from guidance provided by legendary accounting professors Isaac Reynolds and Harold Langenderfer. As it happened, his academic advisor, Reynolds, also taught the introductory accounting class, and the two developed a bond. Langenderfer helped him land a job right out of college with Arthur Andersen in Chicago, where he made his career.

Burton’s tenure at Arthur Andersen was interrupted when he served in the U.S. Army from 1966-69. He attended Officer Training School, graduated with distinction, and rose to the rank of First Lieutenant. He also attended George Washington University at this time. Back at Arthur Andersen, Burton attended DePaul University and received his CPA certificate

Burton rose to assume the position of senior audit manager in Andersen’s manufacturing division. He was responsible for assurance reviews and audits of private and publicly traded companies to include audits of foreign divisions and subsidiaries. Lewis handled purchase investigations and forensic audits of nonprofit agencies, governmental and municipal agencies, and governmental contractors.

After leaving Arthur Andersen in 1978, Burton worked for start-up companies throughout the Midwest. He specialized in turn-around and workout situations for both individuals and small businesses. These businesses included bank holding companies, human capital staffing firms, real estate syndication firms, a television syndication firm, healthcare manufacturing and distribution companies, and an income tax advisory services and tax resolution firm. To enhance his business advisor role, he earned an MBA degree with a concentration in marketing from Roosevelt University’s Walter Heller School of Business in 1998.

He returned to North Carolina in 2013 and lives in Durham. Twice widowed, he’s the father of three adult children, including Michelle Burton (BA ’92).

In his work, in his life, Burton has left indelible impressions. Clients throughout his career attest to his commitment to developing personal relationships. His approach has always been to help people “start and save their dreams.” Many of those clients became lifelong friends.

“The award I’m receiving tonight is not about me,” Burton said in accepting the UNC Kenan-Flagler 2017 Alumni Merit Award. It was, rather, about all those who had assisted in “providing me the opportunity to attend this great university.

He thanked his parents for opening the door and showing the way. When his father died, in December 1989, the North Carolina General Assembly passed a resolution expressing its “deep appreciation for the life of Sippio Burton, Jr.,” recognizing “his contributions and accomplishments in the area of civil rights.”

He thanked the classmates who inspired him.

He speaks today of the importance of maintaining his connections to UNC, in general – he’s a life member of the General Alumni Association – and to UNC Kenan-Flagler, in particular.

“It’s those relationships that are most important,” Burton said. “Relationships are key. That’s why Carolina is so special.”

At Carolina, Lewis Burton discovered his potential – and made a lasting difference.