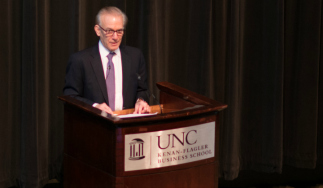 David Ignatius doesn’t know how to fix the world.

But when he stepped to the podium to give the annual Weatherspoon Lecture at UNC Kenan-Flagler Jan. 29, the veteran journalist faced an audience that expected him to tell them how to do just that.

“Someone with a sense of humor – someone who was not me – produced the title of my remarks,” he said with a laugh, referencing the speech entitled “Foreign Affairs: How to Fix the World.”

The name of the talk, Ignatius said, illustrated the uniquely American belief that “anything is soluble with the right documentation.”

Ignatius laced his speech with insights and lessons from his 40-year career as a reporter, columnist and best-selling novelist – “a few observations,” he called them, “about how we got here and about how, over time, we can get out.”

He focused largely on the Middle East, an area he has covered for more than 25 years as a journalist. It’s a region, he said, that is not merely in a state of crisis but rather one of disintegration.

“It’s in freefall,” he said. “People have a sense of vertigo.”

The United States has had little success improving things, Ignatius said, citing a recent report by the Rand Corporation showing that the countries that need U.S. help the most are too weak to absorb it.

He said part of the U.S.’s lack of success in the region was the result of policy issues and poor decisions, including the 2003 decision to invade Iraq and take down Saddam Hussein. 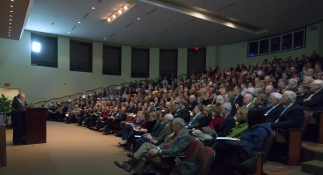 Ignatius shared a number colorful stories from his career as a foreign correspondent, a job that’s taken him everywhere from a hotel bathtub in Basrah, Iraq, in 1980 – with bombs dropping nearby, he thought the tub would be safest – to Tehran, Iran – a city he described as “somewhere between Los Angeles and Pyongyang.”

Despite endless turmoil in so many of these nations, Ignatius said two things the American government cannot give up on are humanitarian efforts  and support for protests like the Arab Spring in Egypt, which he covered from Tahrir Square in 2011.

“I’ll never forget the feeling of a million people gathered in the small place, affirming their rights, yearning to fix this broken political culture of Egypt,” he said. “That electric idea … ‘I’m a citizen, I want to take control of my life,’ – part of that idea is going to be a part of this situation fixing itself.”

In places like Syria and Iraq, Ignatius cautioned against Americans making judgments too quickly or taking actions to divide the countries into “statelets” rather than reunite them as a stronger whole.

“I just dread the thought that we will make decisions for people about the shape of their countries once again,” he said.

The challenge in the region today, Ignatius said, is to reconcile some of those more revolutionary powers with the “status quo” powers that include the U.S. and Saudi Arabia.

“Architecture like that may sound unrealistic,” he said. “But once you have architecture for security, then you have the possibility of change.”

For each international issue he mentioned, Ignatius offered advice for what Americans could do from home. But no solutions could be possible, he said, without basic factual knowledge of what’s going on – which is what makes journalists so important today.

Ignatius said he was taught as a journalist to be objective and challenge people’s ideas and prejudices, but he worries that today’s media instead reinforce partisan ideas that people on either side already believe.

“For a lot of people it’s an encouraging experience, it’s like being in a club … but it is so dangerous,” he said. “When you have embedded media competing narratives that are blowing out the people in the center – who are trained to try to be fair and listen to both sides – the ability to fix things, I fear, begins to disappear.”

Click here to view the Weatherspoon Lecture by Ignatius.

The Weatherspoon Lecture was created with a generous gift from longtime UNC Chapel-Hill and UNC Kenan-Flagler supporters Van and Kay Weatherspoon. Outstanding visiting scholars and world leaders from the fields of politics, education, business and government enrich the professional lives of members of the UNC Kenan-Flagler community and provoke interesting discussion and debate.