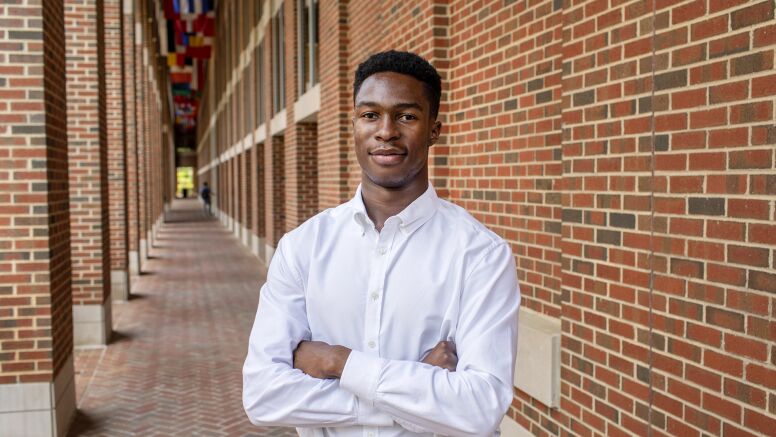 First in the nation. Fifth in the world.

These are two titles that Kenny Selmon (BSBA ’18) currently owns in the men’s 400-meter hurdles.

But what’s more important to him is another pair of titles: student-athlete.

Selmon has managed the challenges of balancing excellence in his studies and his sport – learning he had to dedicate long hours in both arenas to see results in the long run.

“Delayed gratitude” is what he calls it, and he realized it on April 14, 2018, when he ran the 400-meter hurdles men’s race in 49.00 seconds – fast enough to place him at standings of first in the U.S. and fifth in the world overall.

Track was just one part of his focus at Carolina. Like many first-year students, Selmon came to Carolina undecided about his academic path. He credits his upbringing – he was surrounded by his parents and friends’ parents who were entrepreneurs – as the motivating push to apply to UNC Kenan-Flagler.

“I understood that getting into Kenan-Flagler could propel me to the kind of status I saw growing up,” says Selmon. “It made it very easy to understand that what I needed to do was invest in Kenan-Flagler.”

Selmon feels confident about his business abilities thanks to his outstanding education at UNC Kenan-Flagler. “It’s been amazing how much I’ve retained and how much has been instilled into my thinking,” he said.

Selmon took full advantage of the career support at UNC Kenan-Flagler. He worked as a commercial leadership intern at the Coca-Cola Company in Atlanta in the summer of 2017. The internship database, listservs and email notifications from the School helped with the internship process. He also credits the prestige of the School for helping him in his process.

“When it comes to applying to the internship and getting the interview, the name takes you a long way,” Selmon says. “Kenan-Flagler puts you head and shoulders ahead of a lot of people.” 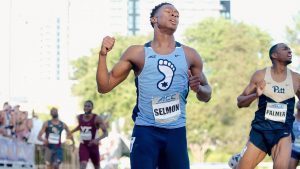 But Selmon’s time at Carolina wasn’t all top finishes. He faced challenges and lulls in his confidence.

“Being in an environment so prestigious, with so many smart people, is very intimidating when you are a student-athlete,” says Selmon. “The challenge was making sure that I don’t feel threatened, or don’t let the intimidation factor of the people that are really smart steer me away from all the same goals that they would get to.”

At the beginning of his time at Carolina, Selmon’s confidence was low. He attributes UNC Kenan-Flagler as the driving factor that changed his mindset and led him to academic and athletic successes.

“Getting accepted into the Business School restored an academic confidence in me that I would not have been able to restore any other way. It goes a long way and it shines very bright within my sport,”  Selmon says. “I’m able to carry myself within my sport as a business man instead of just an athlete. And that type of confidence allows me to understand that there’s more to life than just athletics, while I can still be very good in the sport.”

Competing in athletics helped Selmon turn roadblocks into opportunities. He learned from them and has formed relationships with his classmates and his professors.

He calls his professors extraordinary. “All of them really are very aware of our lives outside of the classroom and they all have been very intentional when it comes to reaching out,” he says. “And just that alone has taught me a lot about relationships and how you have to maintain them and the benefits of that.”

Through all of his courses and connections, Selmon credits UNC Kenan-Flagler to providing him with crucial knowledge he needs to make him a better athlete and propel his track career.

The School’s focus on leadership and innovation “helped me when it comes to leading my team,” says Selmon, “and I’ve been able to take a lot of the things I’ve learned at the Business School and translate them onto the track and in my team.”

In terms of his professional track career, the field requires more personal branding and marketing than other sports that are highly covered by the media, he says. He feels prepared to market himself, run operations and negotiate with agents.

“When it comes to everything that I need to be the best professional athlete that I can, from a business standpoint, the Business School is the reason I will be able to do that successfully,” Selmon says.

While it’s safe to say UNC Kenan-Flagler left a mark on Selmon, he also seeks to leave a legacy at Carolina.

He worked hard to perform at the highest levels, and he hopes to inspire others. “I would like to be the face of a student-athlete within a prestigious academic life who also managed an elite athletic career,” says Selmon.