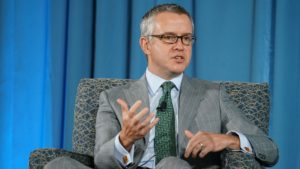 Jeff Jones, CEO of H&R Block, gave the keynote address at the 2017 Undergraduate Business Symposium, one of the oldest and largest student-run career development events in the U.S.

With 27 years of industry experience, Jones has plenty of insights into the world students will soon enter. He began his career at advertising firm Leo Burnett before moving on to leadership positions at well-known companies such as The Coca-Cola Company, Gap, Target and Uber.

Being a leader isn’t about being in a position of power.

“Being a leader isn’t about anything more than being that person who’s willing to put themselves out there, willing to learn, willing to make decisions, willing to take initiative” says Jones.

When he considers hiring someone – especially when a recent graduate who has little job experience – he looks for two key qualities: curiosity and initiative.

He believes it is important to find someone who, no matter their academic background, is interested in learning about all facets of the business and curious about things like the decision-making process or how the company makes a profit.

When an applicant does not have much experience, demonstrating initiative goes a long way. It shows that the person isn’t afraid of putting themself out there and it can be a strong indicator of their future success.

Leaders are only as good as their teams.

Although Jones is the CEO of a tax preparation company, he is the first to admit that he is no expert on taxes. So to be an effective leader, Jones relies heavily on the team of people around him.

Since there are many responsibilities associated with being a leader, it is important to surround yourself with people who are experts in their respective fields. They have to be people you trust to get their job done and achieve the results they set out to achieve.

Understanding yourself is key to a successful career.

Your career is likely going to last for close to 50 years, so there is no rush, Jones says. It’s easy to compare yourself to your coworkers and wonder why you didn’t get that promotion or raise. Instead Jones suggests focusing the first 10 years of your career on acquiring as many skills as possible and learning about yourself. Then start applying what you’ve learned to your job and see what happens. Your career should be more about having confidence in yourself and not comparing it to others.

A similar concept applies to being an effective leader. You have to be really clear on who you are and what you value so that you have the confidence to lead yourself before you can effectively lead others. Jones cited his departure from Uber as an example of a decision he had to make based on his values.

Jones believes that the concept of trying to keep work and life in balance makes it sound like life is good and work is bad. He looks at it from a different perspective.

“When you love what you do then it’s how do I get as much of work and life and not how do I keep them in balance,” says Jones.

However, it is important to recognize that there will be periods of time when one out weighs the other. You have to acknowledge that you’re having a busy week or month and not put too much stress on yourself for that period of time to maintain a work-life balance. If the unbalance persists and there doesn’t seem to be an end in sight, then   reevaluate and make changes.

As someone who has changed jobs a fair number of times, Jones recognizes the importance of that moment when you get a call from a friend or recruiter with a job opportunity. The best time to change jobs is when you are really happy with your current job, he says. You want to be going to something and not running away from a situation.