How Royal Caribbean charted a new course in emerging markets 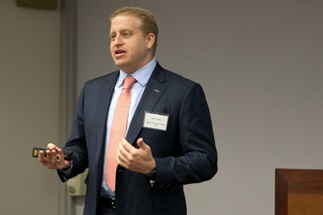 Charting a new course has paid off for Royal Caribbean.

In 2006, 85% of the company’s business came from the U.S. market. Since then, the company has focused on strategically increasing its offerings in emerging markets like China and Brazil. Expanding internationally allowed the company to diversify its customer base and avoid dependency on one market. As a result, Royal Caribbean has evolved from a $4.9 billion domestic company to a global brand with over $8 billion in revenue and is now the world’s second largest cruise line.

While setting sail in new markets opens the door to new opportunities and the potential for increased revenue, it also requires companies to navigate unique challenges and tailor strategies for attracting and accommodating customers, says CFO Jason Liberty (MBA ’15). Liberty spoke about the benefits and challenges of global expansion at UNC Kenan-Flagler’s 2016 Emerging Markets Conference hosted by the Global Business Center.

For Royal Caribbean, seeking new markets required leveraging its growing fleet and attracting new customers in underpenetrated cruise markets. Its competitor, Carnival, was one of the first to move on international expansion and acquired the vast majority of national cruise lines. Royal Caribbean implemented a joint venture strategy with major players TUI Cruises and SkySea Cruises to gain entry into markets like Germany and China.

Building strong teams abroad was key to Royal Caribbean’s success. The company created dedicated local teams and invested in local talent. Having eyes and ears in-country allowed the company to best tailor its product to meet the expectations of travelers internationally. 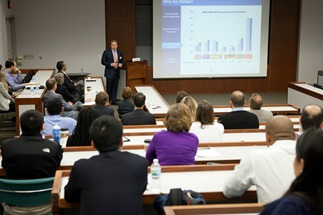 “In order to go global, we had to go local,” says Liberty.

In the Chinese market, Royal Caribbean had to do more than change the language spoken on board. The company found that travelers wanted Western-style luxury adapted to suit Chinese palates and preferences. Because Chinese customers tend to spend more on-board, Royal Caribbean built larger shopping areas on ships sent to China.

Tailoring the cruise experience to the target market proved to be a successful strategy. China has grown from Royal Caribbean’s 45th largest market in 2005 to its second largest in 2016.

Royal Caribbean learned a number of lessons throughout the process of expanding into international markets, says Liberty.

Each country comes with certain amount of risk and unexpected challenges – from government regulations to different customer needs and preferences. And while tailoring your product can be a successful strategy for entering new markets, it’s important to understand what differentiates your company and not dilute your brand.