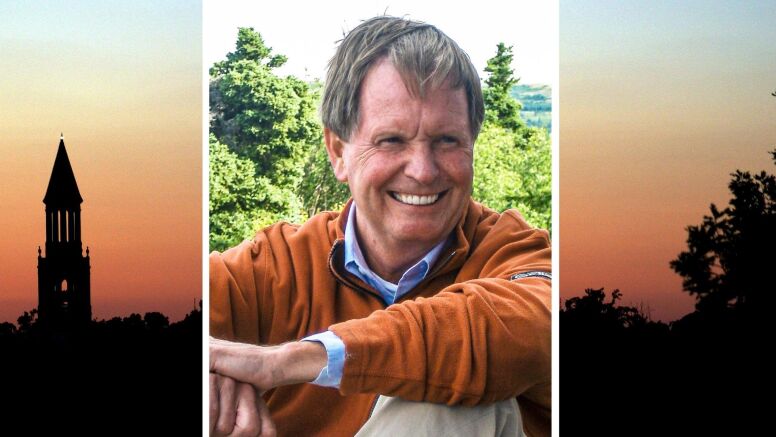 Henderson was best known as chairman of the board and CEO of Burlington, Industries, Inc. when it was one of the largest textile manufacturers in the U.S.

To honor his legacy of business leadership, family and friends are establishing the George “Bunky” Henderson III Dean’s Excellence Fund, which will give the dean of UNC Kenan-Flagler resources to address urgent needs as they arise.

Born on Sept. 26, 1948, in Roanoke, Virginia, Henderson lived most of his childhood in Atlanta. He graduated with a history degree from UNC and later served on the Board of Visitors at UNC Kenan-Flagler.

After graduating from UNC, he became a lieutenant in the U.S. Navy and served as operations and salvage diving officer on the USS Deliver (ARS-23). He was awarded the Navy Achievement Medal for his service in Vietnam.

Returning home, he earned his MBA from Emory University. Henderson had no intention of following his father’s footsteps – who worked as an apparel fabrics sales manager – at Burlington Industries, Triad Business Journal reported in 2002.

He was pursuing banking and finance-related jobs in New York when his dad asked him to “just do me a favor and go by and speak to some of the people who have been nice to me over the years,'” Henderson said. After he visited their New York office, he decided it just “felt right” to start his career at Burlington Industries.

In his 28 years at Burlington Industries, Henderson served in a number of leadership roles that took him around the world, including positions based in Atlanta, London and New York. He was quoted as saying: “I believe very strongly in getting very talented people and creating a team environment.”

Henderson began at Burlington as assistant to the treasurer in 1974. He held various staff and product management jobs until 1978 when he was transferred to London as executive vice president and general manager of European operations for Burlington Sportswear Fabrics.

He returned to the U.S. in 1982 as president of Burlington Denim. He was named a corporate group vice president in 1986 and given the additional responsibility for Lees Carpet division in 1989. He was elected to the company’s board of directors in 1990; named president and COO in 1993 and CEO in 1995; and elected chairman and CEO in 1998, roles he served in until 2003 when the company was sold.

When Henderson was named president at 46, he was Burlington’s youngest chief executive since the company was founded in 1923. His predecessor, Frank Greenberg, ran the company from its New York offices, but Henderson chose Greensboro.

“Though he’s young, he’s certainly an old-timer at Burlington,” analyst Jay Meltzer of Goldman Sachs told the News & Record in 1994. “He came up through the ranks and has been very well tested.”

Burlington Vice Chairman Don Hughes told the newspaper that “Henderson’s strengths include his ability to work with others, his knowledge of the company and his decision-making skills. He has very strong reasoning powers and is not prone to make snap judgments.”

He is survived by his wife of 50 years, Lindsay, to whom he was engaged after a two-month courtship, and their two children, George William Henderson IV (BA ’03, MBA ’10) and Stephanie Henderson Molster (ABJM ’06), and four grandchildren, among other family members.

Following his retirement in 2003, his career had a remarkable second act. He served on the board of directors of Jefferson Pilot, Wachovia Corporation, Lincoln National, Turnpike Properties and Basset Furniture Industries.

“I sat on a corporate board with Bunky and knew him through Carolina,” says Paul Fulton (BSBA ’57), former UNC Kenan-Flagler dean and businessman who spent much of his career with Hanes Hosiery and Sara Lee Corporation.

“Bunky was a very thoughtful and forward-thinking person,” says Fulton. “He saw beyond the immediate issues, way beyond them, and therefore was an excellent board member. He also brought that same vision and caring to a friendship. We have heard about those that couldn’t see the forest for the trees. Well, Bunky saw the trees, but didn’t pay any attention to them. He was all about the future, even in relationships; the nitty gritty stuff never bothered him. He was in it for the long haul. He was the very best.”

“Mr. Henderson was a legend,” says Dean Doug Shackelford (BSBA ’80), a North Carolina native. “For many years Burlington Industries was a corporate giant in North Carolina and people aspired to work there. We are honored that his family and friends are honoring his legacy and supporting UNC Kenan-Flagler in such a meaningful way.”

To make a gift to honor Henderson, click here.