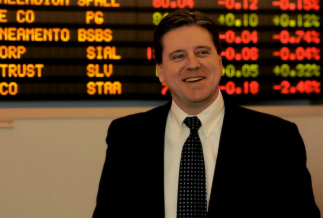 Greg Brown’s drive to innovate in – and build on the strengths of – the finance area is evident in the initiatives he’s launched and led at UNC Kenan-Flagler.

In the finance area, recent innovations championed by Brown include the introduction of the online UNC Certificate in Capital Markets Foundations and a BA in physics with a quantitative finance concentration offered by UNC.

Brown and his colleagues have attracted an ever more diverse and increasingly competitive set of finance students who value the benefits of the tight-knit UNC Kenan-Flagler community.

Strong mentoring, teaching and research are just part of what UNC Kenan-Flagler has to offer in finance, says Brown. Students also learn by managing real funds – using the same tools employed on Wall Street – and taking part in an investment challenge as both organizers and competitors.

Engaging with practitioners on many fronts is a hallmark of the School.

There’s the Capital Markets Laboratory (CML), which Brown helped start in 2008 and led until August 2015. It puts tools of a trader or investment banker in the hands of students and integrates them into the curriculum. The lab, which holds up to 49 students and 15 work stations, comes replete with Bloomberg Professional terminals and Factset.

Students use the CML to manage $13 million across seven funds and research companies – including those where they are interviewing – and participate in case competitions. Professors use the lab for experiments and research in risk management and financial modeling.

The Alpha Challenge is another big draw for the finance community. It is among the events supported by the School’s Center for Excellence in Investment Management, which Brown founded. The stock-pitch competition brings student teams from 16 MBA programs to give recommendations for buying and selling stocks to a panel of prestigious judges.

“The Alpha Challenge has become a premiere event with who’s who in the equity research area,” says Brown. The event features job interviews for student participants – even those from other schools – with recruiters the day before the challenge. Recruiters say that the caliber of the talent at the event has risen dramatically over the years and the competition now attracts the “best of the best.”

To promote research in the area of private capital markets, Brown founded the Institute for Private Capital (IPC) in April 2015. For years, researchers have had rich data for research on publicly traded companies, but information on private markets, such as real estate, private equity and venture capital funds, has been scarce. The IPC will produce data in those areas.

“After years of planning, fundraising and coordination across universities and businesses, Greg launched the Institute for Private Capital, which enables ground-breaking research across industry and among scholars in business, economics, entrepreneurship, law and public policy, says Doug Shackelford, dean and Meade H. Willis Distinguished Professor of Taxation.

IPC already has partnered with a business that was collecting private equity funds data from investors – which is better than the typical self-reported data available from other sources – and used that data to produce new research on the nature of private equity investing. It also is seeking alliances with organizations such as the U.S. Small Business Administration. Twenty research projects have been launched at about a dozen universities thanks to IPC’s efforts in 2015.

What makes Brown most willing to tackle the challenge of cleaning up the raw data is the hunger that both academia and industry have for information on the historical risk of private investments. “We’re generating new knowledge in what has been a dark space,” says Brown. “It’s hard work, but the rewards are substantial.” 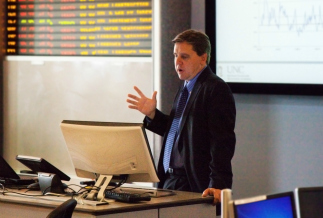 Brown’s current research focuses primarily on private investment strategies, such as hedge funds and private equity investment. He is working on a research project with a former PhD student – now a Tulane University professor – to find out why institutional investors don’t seem to be tricked into thinking performance was better when they see gains reported in net asset values while waiting for the next fund.

“I’m always interested to see what students do when they go off on their own,” says Brown. “Sometimes the relationship comes full circle and I do a project with them as lead researcher.”

As the School’s world-class education and research have achieved new levels of excellence and recognition from the finance community, Brown was tapped to apply his academic, entrepreneurial and leadership skills as director of the Frank Hawkins Kenan Institute of Private Enterprise.

“On top of excelling in research, teaching and service, Greg has demonstrated leadership and management skills at the School and built strong connections with the business community,” says Shackelford. “I’m confident that Greg’s track record of successful initiatives at the intersection of research and practice will benefit the Kenan Institute.”

“I am honored to build on the Kenan Institute’s legacy of economic development, global competitiveness and entrepreneurship,” says Brown. “I’m enormously excited about continuing to realize the vision of Frank Kenan to promote collaboration among business, government and academic leaders – and to explore new opportunities.

Brown has demonstrated entrepreneurial acumen inside the Business School, says Jennifer Conrad, senior associate dean for academic affairs and the Dalton McMichael Distinguished Professor of Finance. “His recent success with the Institute for Private Capital demonstrates his ability to see an opportunity, create a strategy around it, develop relationships with internal and external constituencies to take advantage of it and build something that advances knowledge in a number of disciplines and across the institution.”

His ties to the business community include serving as director of research for Amundi Smith-Breeden Associates, a global asset management firm specializing in fixed-income investments. He also has consulted on financial risk and portfolio management for money management firms, the U.S. government and Fortune 500 companies.

Before he embarked on an academic career, Brown was a research associate at the Board of Governors of the Federal Reserve in Washington, D.C. and worked in artist relations for a subsidiary of Capitol Records in Hollywood.

He spends what rare free time he has with his wife Lisa, a fundraiser for a nonprofit consulting firm, and their two sons.

“I like to say that we spend our free time involved with the kids’ activities – and we sleep,” says Brown. He enjoys cheering on his older son – an avid baseball player – and helping coach his younger son’s robotics team.

Brown also enjoys woodworking but says he mostly fixes things nowadays, as opposed to making anything new. It hardly compares to the passion he and his entire family share for skiing, which they try to do in Colorado during spring and Christmas breaks. “Everyone has to be a skier in this house,” he says.

Despite the beckoning of snow, Brown likes his North Carolina digs. Having earned a BS with honors in physics and economics at Duke University, he already was aware of the area’s appeal to families when UNC Kenan-Flagler recruited him to the faculty in 1998 after he earned his PhD at the University of Texas at Austin.

UNC Kenan-Flagler’s prestigious research faculty and highly rated programs appealed to him, but what really won him over was the fact that the School’s ambitions matched his own.

“There is a real commitment to excellence,” says Brown, “and a real desire for UNC Kenan-Flagler to be world-class on every dimension.”