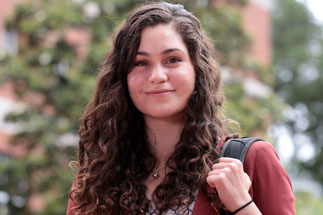 Resilient is one way to describe Karina Gonzalez Sanchez (BSBA ’17), who despite her youth, is already a global citizen.

During the summer of 2016, she was making plans complete her studies at UNC Kenan-Flagler Business School in December – a semester ahead of schedule – when her mother was diagnosed with mesothelioma, a type of cancer caused by exposure to asbestos.

“You hear this kind of news and believe the scariest is going to happen,” says Gonzalez. As her mom began treatments to reduce the cancer in advance of surgery, Gonzalez took off the fall semester from UNC to concentrate on caring for her mom and their family.

When her mom had surgery that November, surgeons removed a lung. “I think the worst is behind us,” says Gonzalez. “She’s strong.”

Gonzalez returned to Chapel Hill for her final semester with the goal of graduating on time – and that’s just what she did.

Her mother, who is undergoing immunotherapy treatments, flew from Texas to North Carolina for Gonzalez’s May 2017 graduation.

“When I finally crossed the stage and hugged my mom – who was standing, glowing in a beautiful turquoise dress – I felt like a painful chapter had closed and I felt united to my family more than ever,” says Gonzalez. “My sister and I are the only ones in our family who have graduated from a U.S. institution, and I am very aware that this has made a huge difference in the opportunities available to us. My parents have always been supportive of our education and constantly refer to it as the best inheritance one can receive. Graduation was just as special to them as it was to me.”

Facing challenges head on – like being the new kid in a new country— is nothing new to Gonzalez. Her family moved to the U.S. from Chihuahua, Mexico, when she was about 10 after her father earned a promotion from his employer, a multinational company.

“When I was younger, I thought of the U.S. as temporary – my father was supposed to have a one-year assignment, but he kept getting extensions,” Gonzalez says. “I’d love to go back to Mexico at some point. Maybe, I’ll go home and start a company. It’s one dream.”

Gonzalez dreams big – and goes after those dreams, making the most of her studies at UNC Kenan-Flagler.

She was selected for the prestigious Global Learning Opportunities in Business Education (GLOBE) program, a partnership between UNC Kenan-Flagler, Copenhagen Business School and the Chinese University of Hong Kong. For 18 months, students from all three schools learn about business from expert faculty at all three schools – traveling the globe. She studied European and Asian markets and strategies through coursework, case competitions, cultural immersions and study trips to Belgium, Singapore and Malaysia.

On the career front, she had two summer internships with Facebook. The first was in Menlo Park, California, as part Facebook’s first class of undergraduate business interns. One of just 36 interns chosen from more than 1,000 applicants, she worked in “people operations” and conducted a gap analysis on Facebook’s vendor termination process, negotiated with business partners to address problems and developed a strategic solution.

For her second Facebook internship, Gonzalez was an account manager for small and medium business (SMB), helping clients optimize their marketing strategies. Based in Austin, where her family lives, she worked there when her mother was first diagnosed with cancer. Facebook was supportive as she balanced her work with her family’s needs.

Now that she’s graduated, she’s still engaged with Facebook – she landed a full-time job in its international headquarters in Dublin, Ireland. She is an account manager for the Spanish market with Facebook’s SMB department.

While her first language, Spanish, will serve her well in her new job, she’s also fluent in French, her third language, mastering Portuguese and studying German and Mandarin Chinese. 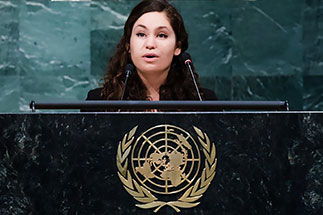 Gonzalez made the case for multilingualism’s role in fostering global citizenship and cultural understanding when she spoke – in French – at the United Nations General Assembly. She was one of 60 students from 36 countries – selected from a pool of more than 3,600 entrants – who won the 2016 Many Languages, One World® international essay contest,  organized by ELS Educational Services, Inc. and the United Nations Academic Impact. She received an all-expense-paid trip to New York to present her action plan related to the U.N. 2030 Agenda for Sustainable Development.

Gonzalez also discussed education as method for ending discrimination when she was selected as a delegate to the International Student Festival in Trondheim, Norway.

She received merit scholarships funds from UNC Kenan-Flagler as part of her GLOBE studies and a McMichael Family Study Abroad Scholarship – and she knows about giving back, too. She worked as fundraiser for the Carolina Annual Fund and a Spanish instructor at McDougle Elementary School in Chapel Hill, where she designed and implemented an after-school Spanish program that incorporated cultural elements and interactive games into lesson plans.

Clearly, geography doesn’t limit her. “The dream is to end up in Paris,” Gonzalez says. “I love Paris.”

She certainly spread her wings at UNC, where she sought out opportunities available to her – on campus and around the world.

“At first, I was pretty nervous coming from out of state,” says Gonzalez. “You must dive into UNC, but it embraces you back. I was surprised how much it felt like home.”

UNC showed her the power of community. “From building one in and outside of UNC Kenan-Flagler as well as in Copenhagen and Hong Kong, creating a community has been essential to my success and happiness,” says Gonzalez. “Finding ‘your people’ is what allows you to thrive. This lesson is, without a doubt, one which will help me establish myself in and make Ireland my new home.”