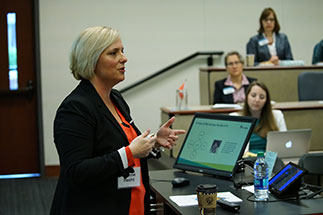 According to Jeanne Hecht, chief operating officer of Median Technologies, working around the globe requires self-awareness, a knowledge of other cultures and, more importantly, building real connections. As the former global head of sales for Quintiles and the current COO of a medical imaging company headquartered in France, Hecht has more than 20 years of international experience.

Hecht lived in Singapore when she led Quintiles’ commercialization efforts in Asia as the company switched from an import to local business model strategy. In her keynote speech at the 2017 Emerging Markets Day hosted by UNC Kenan-Flagler’s Global Business Center, Hecht shared lessons she learned in the field.

After moving to Asia in 2010, Hecht noticed the cultural differences. She describes herself as assertive and emotionally expressive. “I’m an extrovert and extremely direct,” She says. “I love debate and discussion, and I don’t get offended. I get kind of impatient when people do not like to have debate and discussion. I’m fast paced and tend to be strategic.”

On the other hand, people in Asia tended to be more emotionally unexpressive and conflict avoidant. Through her sales career, she learned that the way she was accustomed to speaking and interacting might not align with people from other cultures.

“In Asia, I learned about guanxi, and it’s about developing relationships before you ask for things. It’s about trust and reliance,” says Hecht.

She realized the importance of cultivating strong connections and a respect for her Asian counterparts, and adapted the way she communicated and interacted with others.

Early in her international career, Hecht flew to Japan to troubleshoot a problem when her team didn’t understand Japanese customs – they didn’t list that there was a staple in the customs forms, causing a customer’s order to be delayed. She made the trip to Japan to apologize to the customer for the mistake.

Hecht used the example to outline the disparities in business practices between countries. “Don’t just go in there with your culture’s way of thinking,” she says. Instead, do thorough research on all of the details of the country where you are doing business.

In some countries, there are taboos that companies must avoid. In China, Hecht learned that giving clocks as trade show gifts was frowned upon because in Chinese the word clock rhymes with a saying about death and funerals. In other countries, a border on a document might look like a death certificate.

Ultimately, the business environments also vary from country to country. Everything from price sensitivity to negotiation can look very different in Asia or Europe. Policies on gift giving vary, for example. In some countries, people might expect you to pay for various gifts and expenses as part of the deal, but Hecht cited the importance of staying true to company policy.

Business people can’t know everything when it comes to doing business in another country, she says, but should do their best to prepare. That includes first challenging themselves to build relationships with their counterparts with empathy: “After you go through good situations or bad situations there is always a chance to relate to people as a human being, and that’s a real critical lesson that I’ve learned. “