Giving back to combat hunger 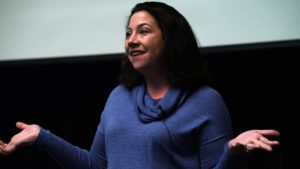 Soulfull Project co-founder Megan Shea shared her experience of working in a for-profit business with a social mission in her keynote address at 2017 FoodCon at UNC Kenan-Flagler Business School.

“It started with a promise.”

Shea recounted the story of Soulfull Project’s creation during a Campbell Soup Company work trip to Texas. She and her co-workers were researching what families were eating when they met a mother of three children who didn’t have enough food to feed her family. Shea and her co-workers left Texas, promising to do something to help people in need.

“We never followed through,” Shea said.

A year later, they were reminded of their broken promise when a mother knocked on her door and asked for food for her family. That night Soulfull Project was born, launching a for-profit company that provides good-quality combined with a social mission to end food insecurity in America. It provides access to healthy food and consumers make a difference through their purchases.

“We are centered on direct impact on people,” Shea said.

To increase their impact, Shea and her team launched the Soulfull 100 campaign on Aug. 1, 2016, with the goal of giving back to the community for 100 days. One hundred days later, the campaign ended with success.

Looking to the future

The latest collaboration with Amazon and supermarkets allows Soufull to increase their impact nationally.

Shea hopes that through Soulfull Projects and other companies, people will learn more about hunger and food access and end food insecurity so that families will never go hungry again.

“What would the world look like if we can do that?” Shea asked.