They were right – and then some.

For so long, I had listened to others’ stories about studying abroad and the incredible experiences they had in another country.

After sitting through numerous pre-departure sessions, I was ready to experience a two-week study abroad in South Africa for myself.

My Global Immersion Elective consisted of visiting Johannesburg and Cape Town – we spent about a week in each city. I was joined by 31 of my fellow UNC Kenan-Flagler students and three faculty advisors. My trip to South Africa was only my second trip out of the country. I should note that my college experience has been a huge factor in growing my “travel bug” – and I love it. This was another huge step for me, as this time I was traveling way outside of my comfort zone – 8,027 miles.

If you have never traveled to South Africa, please be aware that the flight is long, the planes are huge and you may experience jet lag – no, you will experience it. In total, the flights took 20+ hours, including a layover in London and a 12-hour flight across the continent of Africa.

My group and I arrived in Johannesburg at 7 a.m. and began our day at 11 a.m. 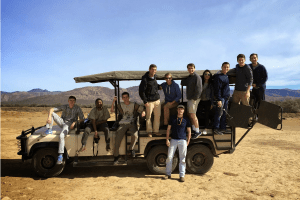 Austin with his UNC Kenan-Flagler classmates

Before making the trek to South Africa, I had very clouded views of the country. American media has polluted my mind with images of animals running wild, dry, deserted towns and no hope for opportunity. However, I quickly learned that all of these are false.

During our first day, we visited the African Leadership Academy (ALA). The ALA is similar to a high school – with students ages 16-19 from 44 countries in Africa – with a lower acceptance rate than Harvard. We spoke with a few of their bright students about some of their entrepreneurial endeavors. Genesis, a young guy from Cameroon, was interested in starting his own paper bag company that would help with the high unemployment rates in his home country. Hearing the stories from these students was such an eye opening experience for me. Each student was more passionate about helping his or her community than about making a profit.

While in Johannesburg, we stayed in an affluent area – so affluent that we were in the richest square mile in all of Africa. For those of you who might be unaware, South Africa is the most unequal country in the world, with more than a 50 percent unemployment rate. The average person lives on $1.50 per day. Just outside of the little affluent area I was staying in were 700,000 South Africans that live in strict poverty in shanty towns called townships. Townships were created during the apartheid era and were used to keep black Africans out of white African areas.

Although these areas seem desperate and hopeless, I was able to see a side of the story that the American media rarely talks about. We ventured to Soweto, the home of Nelson Mandela. On the drive from Jo’burg to Soweto we slowly saw a change in scenery. The large houses with even bigger fences began to disappear and the small shacks began to multiply. While in the township, we saw the citizens of Soweto protesting the load shedding issue in South Africa. In order to conserve energy for the country, the government has to shut down power for extended periods of time, which is slowing the growth of their economy.

We also visited a local restaurant called Sakhumzi. The food was different – way different. They served intestines, lamb and some other things that I can’t even describe. I probably wouldn’t go back, but hey, it’s all about the experience. 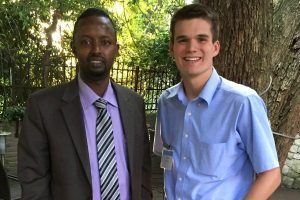 My favorite part about Jo’burg was meeting local entrepreneurs and hearing their life stories. We met Askar, a Somalin that ventured to South Africa when he was a young teenager. He made his way by boat, car, bus and train, eventually arriving with only the clothes on his back. However, Askar didn’t let his lack of resources hold him back. He became a hawker – someone that sells arts and crafts to tourists. This job was very dangerous because he had to travel from Jo’burg to Cape Town by train with all of his goods. On one occasion, he met face to face with a thief who stabbed him in the stomach with a knife. Luckily, he made it to the hospital in time for a quick recovery. After he quit selling goods on the street, Askar started a local supermarket, which eventually got him to where he is today: Working for Barclays.

As Askar told his story, I was inspired. Not just because he defied the odds, but because he never gave up. Askar was one of the most sincere individuals I had ever met. In only a few days in South Africa (Jo’burg), I had already learned so much. I put my negotiation skills to work and bartered a UNC shirt for some goods at a local market. I learned that the world is huge and has endless opportunities. And finally, I learned that South Africa is on the rise – and I saw it up close and personal.

After about a week in Jo’burg, we hopped on a two-hour plane ride to Cape Town. Most of the group was most excited to visit Cape Town because it is known for being a more touristy area – it has been compared geographically with San Francisco. With my first glimpse of Cape Town from the airplane, I could see the resemblance.

Our week in Cape Town was a lot like the week in Jo’burg, but with a few added bonuses. We heard from many different speakers and visited different companies and townships. We also got to go on a safari and used our free day to go out swimming with great white sharks.

In Mflueni, a small township in Cape Town, we interacted with entrepreneurs yet again. This time, however, we put ourselves in the shoes of these entrepreneurs who are selling goods and services in the township community. Our job was to sell SIM cards and winter coats on the street. This was another huge learning experience because we were selling to people that could barely afford them (and my country accent didn’t help the cause).

My group only sold one SIM card. Locals who passed us gave us a strange looks – but wouldn’t you if a whole group of American students rolled into your neighborhood selling SIM cards? 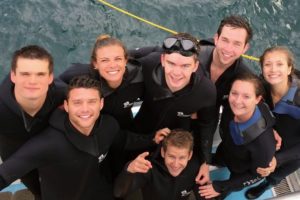 My favorite part of the trip was getting to know all of my fellow classmates. In college, it becomes difficult to branch out and meet new friends all the time. You find yourself sticking with a core group of friends for the entirety of college. This trip allowed me to really get to know some people I had never met. In our final trip debrief session, I challenged the group to stay connected with the people they met on the trip because there is a great possibility that they will never again go on a journey with 31 people of their same age.

I could write on and on about my experience abroad, but it wouldn’t do you any good. You have to go. Have to. No matter the cost, a trip in another country with students and friends your age is priceless. When I applied to go to South Africa, I really didn’t know why I wanted to go. Yeah, it was a goal of mine to study abroad, but I didn’t know why exactly. I do now. It was for me to meet new people, learn new and exciting things, and be humbled. The people in the South African townships lived in what most people in America wouldn’t consider a house. However, these people love their community and are not giving up – they are super optimistic about the future.

One of the guys on the trip reminded me of an old analogy. There are two clocks in this world: A world clock, which is circular, and your clock, which is an hour glass. Time is not on your side, so you must do BIG, great things while here on Earth. Whether it’s singing your school’s alma mater in a foreign country or making small talk with a stranger on a plane, just go. Time is wasting.