Skip to content Skip to Programs Navigation
Getting down to business

Getting down to business 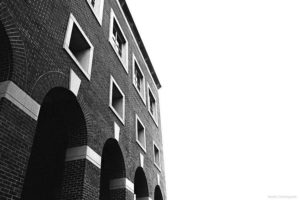 I remember the first time I saw UNC Kenan-Flagler Business School during the summer of 2003.

I was seven years old, celebrating my father’s graduation from the Executive MBA Program. Towering high above the base of Skipper Bowles Drive, the red brick McColl Building and its neighboring structures looked like a castle to me. Its sloping arches and square windows were simple, yet inexplicably elegant. I remember walking under the procession of flags leading up to the glass doors, squeezing my father’s hand and straining my eyes to point out the Brazilian flag to him. This was the place where my father became, in the elementary vocabulary I was limited to at the time, a “business man.” That’s how I introduced him to my friends, unaware of exactly what he did on a day-to-day basis, but overflowing with immense pride.

When I visited UNC in the spring of 2014 with my mother, the first place we went to was the Business School. It was pouring rain and my woolen sweater was doing its best to keep me dry, with raindrops beading up for several seconds only to collapse into the fabric. Undeterred, I walked out onto the terrace in front of the McColl Building and angled my neck down. Before me lay a bed of red bricks, engraved with the names of countless graduates. I struggled to make out the names, a vibrating, rippling film of reflective water obscuring rows of Smiths and Johnsons. I scanned the endings, looking for the Latino-sounding ones but combing through the Hispanic “-ez’s” in search of a Portuguese “-es.” It was probably to my mother’s surprise when I doubled over in laughter upon finding my father’s brick. Despite spelling his name right – an impressive feat in itself – it listed his graduation date as 2023. Better late than never, eh Dad? The brick has since been replaced with one listing his correct graduation year, but that story has become a special source of pride and laughter in my family.

UNC Kenan-Flagler Business School holds a special place in my heart. It is a site of immense pride, unbridled laughter and tremendous opportunity in my family. Every red brick on which I step reminds me of my father – of the two difficult years he spent travelling back and forth between Florida and North Carolina, all so that he could build a better future for me and my sister. I remember how he would spend hours on end studying in his office with the door closed and that my mother would ask me not to disturb him when I wanted to play. At the dinner table, he would hold his head up with his left arm, his fingers scrunched up in his hair, the same way I do when I’m stressed. One Father’s Day, I dressed up in one of his favorite Brooks Brothers slim-fit, non-iron shirts and a pair of dark brown leather shoes – the ones with the metal horse bit on the tops – eagerly awaiting the smile I knew my clownish appearance would bring to his face. I now own the same Brooks Brothers shirts and have a pair of the same horse bit shoes.

In the fall of 2016, I’ll be joining the UNC Kenan-Flagler Undergraduate Business Program, as well as working as a photographer for the Business School – a son following, quite literally, in his father’s footsteps. He inspires me every day.

This post has been republished with permission from the author.