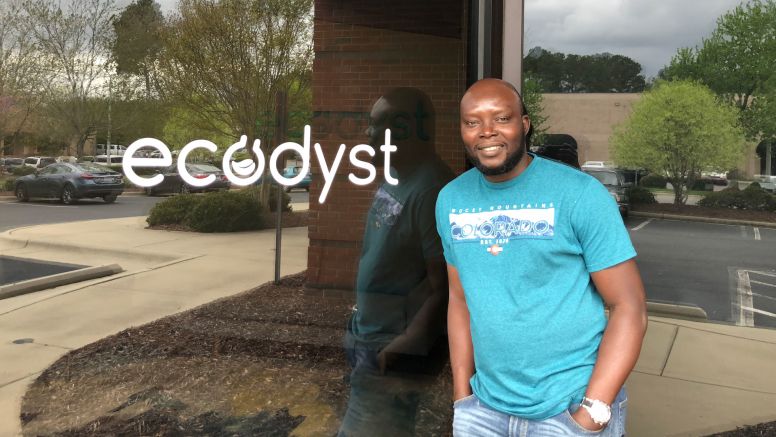 George Adjabeng’s father aspired that his children would learn to read and write.

Adjabeng (MBA ’10) was born in a village in Ghana. His family farmed tomatoes and other subsistence crops. They had no running water or electricity. Adjabeng trekked each day to school.

Adjabeng’s parents had no formal education, but they very much wanted it for their children.

“When my father would get a letter, somebody had to read it to him, and then he would have to get someone to write the reply,” Adjabeng says. “His goal was for us to be able to read and write our own letters. I remember that very well.”

Adjabeng displayed an affinity for math, physics and chemistry. “By the time I finished high school, I’d fallen in love with chemistry,” he says. “I had a teacher who taught me organic chemistry in my third year, and I just loved it. It made so much sense to me.”

He then came to the U.S, taking a position in medicinal chemistry with Roche Pharmaceuticals in Palo Alto. A year later, Adjabeng moved to GlaxoSmithKline (GSK) in Research Triangle Park, joining its oncology drug discovery group. There he twice received the Exceptional Science Award for significant contributions to the discovery of new drugs. He was a discoverer and first inventor of the melanoma drug Tafinlar.

He left GSK in 2011, taking research positions at the National Institute of Health and the UNC Eshelman School of Pharmacy in search of something new. “I realized I didn’t want to spend the rest of my life in the lab,” he says. “I wanted something more.”

He wanted independence. “I grew up watching my parents work on their farm, a life of independence, in which you don’t work for anybody. This was a seed that was sown in me from childhood.”

He chose to pursue an MBA, and looked at both UNC Kenan-Flagler and Duke’s Fuqua School of Business. UNC Kenan-Flagler’s OneMBA Program captured his attention. “It fit into what I wanted to do after business school. I wanted to live in the world. I wanted to have something where my work expands beyond my geographical location.”

He studied with students from 37 countries on five continents – and there was the allure of UNC. “Going to Carolina was a big thing for me,” he says.

UNC Kenan-Flagler put Adjabeng “on a track to thinking with a more entrepreneurial mindset,” he says.” If it weren’t for the Business School, I don’t think I would have identified the problems for which I decided to find the solutions. I wouldn’t have thought of a solution that could lead to a business.”

In 2014, he and Kwabena Williams co-founded Ecodyst, based in Apex, North Carolina. He also created EcoChyll, a refrigerated cooling device used in chemistry labs and industry to separate a mixture of chemicals. Ecodyst’s technology does not require a source of water or dry ice, eliminating the major sources of material waste associated with conventional devices.

The inspiration for EcoChyll was born, with a Business School strategy paper. “This whole thing started from me saying, ‘Who says this function should be done this way? Could there be a better way?’”

Last year, Ecodyst donated one of the devices to UNC’s Eshelman School of Pharmacy. Ecodyst donates at least one each year and the University of Cape Town, South Africa was selected for 2018.

Next up for the company, Adjabeng says, is “basically, grow, grow, grow” – global expansion, first into Europe, and launching new products. Our disruptive technology is replacing the traditional devices and becoming the new standard in many industries performing chemistry.

What motivates George Adjabeng? “Problem-solving. The thing that drives me is to get to a point where I can solve global problems” – malaria eradication, for example. “That’s what drives me every day – coming in every day and having the ability to create a new product or solution.”

“People ask me every now and then, ‘How do you do this?’ ‘How do you know this?’ And I often credit that to business school. It has helped me to bring this company this far without jeopardizing the business and losing it to somebody. Learning how to do big things with little. You can start a business and raise a lot of money and before you know it, you don’t own the company anymore.”

UNC Kenan-Flagler positioned Adjabeng to ward off that threat.

“We started very small,” he says. “We bootstrapped. We didn’t go out to raise money from VCs. We managed to launch the product and get it to market, and we became profitable within the first year of sales. This all came out of things that Kenan-Flagler taught me.”

Adjabeng hasn’t been home to Ghana in five years, but plans to return within the year. He has a powerful message to convey: Education is entrée to the world.