From public life to the public good 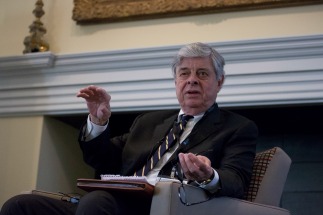 Former U.S. Senator and Ambassador to China Jim Sasser has done both, pushing through fiscal reform measures and chairing the Senate Budget Committee, as well as serving as a Chinese ambassador during the late ’90s – the formative years leading up to the World Trade Organization agreement of 2000.

Sasser, a fellow at the UNC Global Research Institute, has spent more than a quarter-century in the public life. He sat down with Larry Stein, senior vice president for policy affairs at Capital One Financial Corp., at the Frank Hawkins Kenan institute of Private Enterprise’s “What’s Next, America?” conference, where the two had an open conversation looking toward America’s future beyond the 2016 U.S. presidential election.

Donald Trump has since emerged as the winner of the election. Stein and Sasser’s conversation described the measures America’s new president needs to take to foster more prosperity in the U.S. following a tumultuous and hard-fought election.

When Sasser first served in the U.S. Senate in January 1977, Republicans and Democrats would generally put aside their differences and work together on legislation when faced with vital issues, he says. “But each party now defines victory as a defeat for the other, and that is not good for the country.”

Gerrymandering of congressional districts lead to this polarization, Sasser says. And media market balkanization has added to the tension. A fairness doctrine – enforced by the FCC when airwave scarcity was a concern in the past – once regulated the renewal of licenses required for radio or TV broadcast stations. Back then, station owners needed to prove their outlets did enough public service work to justify a license renewal. The fairness doctrine stated that if owners allowed one view to be expressed, the opposing view must also be given the same opportunity.

“Now, everybody can tune in to whatever appeals to their prejudices, their biases or their views,” Sasser says.

Sasser and Stein don’t expect this polarization to subside any time in the immediate future – and it could lead to a partial realignment of the two major political parties, with seemingly populist offshoots sprouting on both sides of the electorate.

“The crux of this sour feeling – the disenchantment and disaffection in our electorate – comes from economic malaise, and our next president needs to work to stimulate this economy and really get it going in a rapid-growth mode,” Sasser says.

A capital redevelopment program might be the fuel needed to ignite a political reconciliation during the new president’s administration. It would include rebuilding some of the nation’s roads, bridges and airports, as well as refurbishing outmoded electric grids and communication systems.

“An infrastructure program that both parties could agree on would revitalize the economy and reemploy some of these groups that are so disaffected,” Sasser says. “This would be an investment in our future, and I think you can sell that to both parties.”

The timing would work for an ambitious infrastructure project. Interest rates have remained near historic lows, and foreign nations have put funds into U.S. government bonds. The project would entail using some of these funds at low interest rates to stimulate the economy and restructure our basic needs, says Sasser.

An ongoing relationship with China

U.S.-China relations have changed since Sasser’s time in Beijing during the late ’90s. “At that time, we had a good relationship – but the Chinese leaders now are much more assertive than the ones I dealt with, and that’s because they’ve got more cards to play.”

China’s GDP has exploded, and Sasser estimates the nation will become the world’s most powerful economy by 2025 or 2030. He’s optimistic about U.S. relations with China because the two nations have developed an economic codependency sustained by foreign investments.

“What we need in dealing with China is strong leadership on both sides that understands what’s at stake,” he says. “There’s a lot to be said for personal relationships and mutual dependency of countries and economics.”