Skip to content Skip to Programs Navigation
From opera to accounting

From opera to accounting 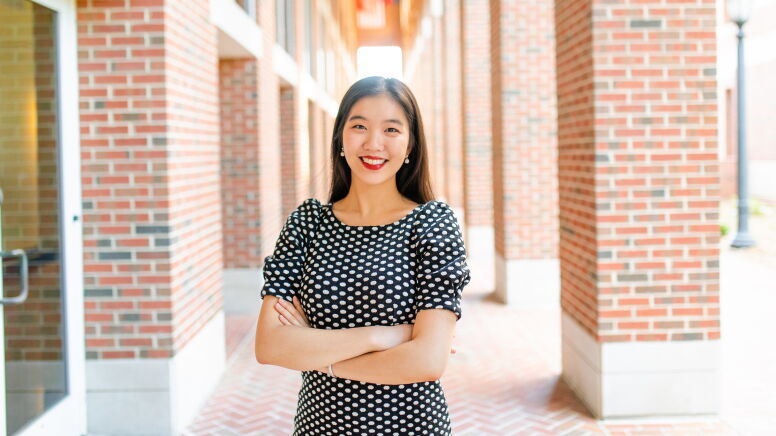 “I feel really free with music,” says Zhuo. “Someone once told me that if you want to be completely honest – sing.

“Singing is very visceral; it’s a gut connection, a heart-to-heart from the singer to the audience. It can be to one person. It can be to a hall of hundreds.”

In her junior year at Carolina, Zhuo was pursuing a degree in music with a voice performance focus when the COVID-19 pandemic began and it continued through her senior year.

“I was ready to pursue a career in the arts after discovering that path at Carolina,” says Zhuo, “but then the arts just shut down.”

Just a month after graduation she went from studying piano and voice to joining the Master of Accounting (MAC) Program at UNC Kenan-Flagler Business School.

Zhuo’s MAC studies helped refine her career path, both in accounting and the arts. The two fields unexpectedly compliment and inform each other, she says.

After graduation Zhuo joined Ernst & Young’s financial service organization as a tax associate in New York. She feels she has the well-rounded education to one day launch a side career in social justice advocacy and arts entrepreneurship.

Just three years ago, she was performing Puccini operas across Italy.

“My interest in taxes,” Zhuo says with a smile. “Yeah, that was very surprising.”

Zhuo started out on a pre-med track at Carolina because that’s what was expected of her. It just wasn’t what she wanted.

The arts had always been a part of Zhuo’s life growing up in Princeton, New Jersey. She learned to play the piano at 4 years old. She took ballet and sang in a chorus. Her English name reflects her artistic passion and skill.

“Growing up I dreamed about becoming an artist, but I never seriously thought it could be a career,” says Zhuo. “I was following my parents’ and my community’s expectations.”

Zhuo’s life changed after she went to a concert on campus her first year at Carolina.

“It was a transformative moment,” says Zhuo. “I think a lot of concerts can do that, but something about that one concert made me see a purpose for myself. That concert provided a definition of what music meant to me, and that was to find love within myself and share that love with others.”

Zhuo didn’t look back. She focused on piano performance and later switched to voice. In 2019, she was accepted into the Si Parla, Si Canta program and spent eight weeks in Arona, Italy, learning the language, music and culture of the country while performing throughout it.

At Carolina, she learned about the business side of the arts in a course on arts entrepreneurship, where she realized how mastering accounting might be beneficial to navigating a career as a business leader within the arts.

“When the pandemic came, I thought, ‘OK. How do I combine the skills I’ve learned in college and make it something of my own?” she says.

A leap of faith

Her mother, an accountant, encouraged Zhuo to explore the MAC Program as she weighed her post-graduation options. 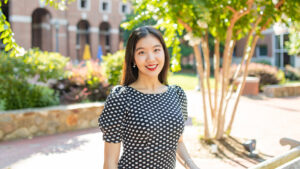 “When I first applied to the MAC Program, I really needed to ask the admissions team if there was any way to do creative programming,” says Zhuo. “They might not have expected that, but they were very open to the idea. They said to make it my own.”

Zhuo dove into the one-year MAC Program and the community. As a student with a non-traditional academic background and as an underrepresented minority, Zhuo was nervous about fitting in.

“I had some reservations, but the more I looked at Carolina’s program and how it was so welcoming of students from non-traditional backgrounds, it really drew me in,” she says.

The degree was just one goal. After finding her own voice, Zhuo became dedicated to helping others find theirs, too.

As she took tax courses she became interesting in investing. She joined the Investment Management Club and served as an equities analyst on the student-managed Global Perspectives Fund.

She also took on leadership roles. Zhuo served as president of the MAC Student Association and chaired the program’s diversity committee.

“When I was in music, something that was really beautiful was how it was able to bring people together regardless of their backgrounds. People appreciated something instantly because of that connection,” she says. “I saw diversity, equity and inclusion programs at UNC Kenan-Flagler as a platform where we could share our stories with each other and push people to get a little bit outside of their comfort zone to see the other side.”

Zhuo explored new approaches to DEI when she was among the UNC Kenan-Flagler graduate students chosen for an innovation exchange at Grenoble Ecole De Management. She learned new ways financial technologies and games can drive community building.

Toward the end of her time in the MAC Program, she helped organized a simple yet effective activity: A roundtable chat for students to discuss personal experiences and share ideas for making UNC Kenan-Flagler more inclusive.

“There was this built-in enthusiasm that people at UNC Kenan-Flagler had to learn about other experiences and views that made it all worthwhile,” says Zhuo. “There was willingness and open hearts brought to the table.”

In New York, Zhuo finds herself at a leading center of her two worlds – business and the arts.

She joined EY Ripples, Ernst & Young’s service initiative, as a volunteer mentor. She has met with global entrepreneurs and nonprofits, helping them workshop business plans and pitches. It’s another way for Zhuo to combine her business and creative skills to serve communities.

And while at Ernst & Young, she plans to continue performing and working with other artists, especially in teaching and mentoring youth who might not be able to afford music lessons or have access to the arts.

Then there is putting her business training to work in new way: Zhuo aims to create an arts café where young artists can perform.

“Accounting and working in financial services provide many tools needed to be able to serve areas in need,” says Zhuo. “I am really grateful for my time at Carolina. It helped give me the courage and drive to try different things. I developed into an agile learner. It made me unafraid to change paths.

“Carolina helped me hear my own voice.”