Francie Keenan: A mind of her own 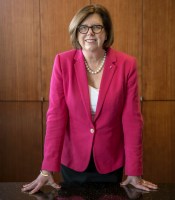 Frances Murray “Francie” Keenan (BSBA ’76) was a member of the first class to enroll at UNC following the passing of Title IX, a portion of the U.S. Education Amendments of 1972, which banned sexual discrimination in any federally-funded education program or activity. At the time, she says, she didn’t fully grasp the significance. “I’m not sure I ever really thought about it,” she says of being one of just a handful of women students in her class.

Perhaps that was because Keenan was busy charting her own course. She came from a long line of Tar Heels – including four generations of alumni on her father’s side of the family – and was determined to make the most of her Carolina education. Being part of the minority of women students in her freshman class didn’t faze her – she was determined to excel and succeed.

Over the next four years, the UNC community underwent a massive transformation. By the time Keenan graduated – with highest honors – in 1976, women students outnumbered their male counterparts in UNC’s freshman class. The following year, they surpassed the men altogether.

After graduation, Keenan set her sights on the business world. She approached the start of her career with the same attitude that had brought her success at UNC. “I just went out into the real world and did my thing,” she says.

And that she did. 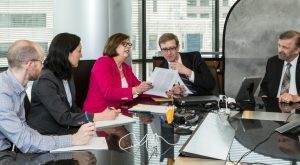 Keenan – a CPA who majored in accounting – began her career working in finance roles at KPMG and Black and Decker. She made it a priority to strike a balance between family and career – particularly after the birth of her three children, who she calls her “greatest success in life.” With help from her husband and “a village” of support, Keenan continued to work while raising her children.

In 1987 she joined Abell Foundation, a unique and innovative non-profit dedicated to improving the quality of life in Maryland. Through grants and direct investments, the Foundation – with over $350 million in assets – drives education, job creation and economic development across the state, with a particular focus on Baltimore.

One such investment is Paice LLC, a company that developed technology which laid the foundation for today’s hybrid vehicles. Abell Foundation invested in Paice in 1998, and Keenan managed the investment, later signing on to serve as the company’s executive chairman. Support from the Foundation – the company’s primary investor – fueled Paice’s growth, opening the door to license agreements and joint development projects.

TRI is currently operating a demonstration facility in Durham, N.C., to verify and validate various configurations of its core technology, and has partnered with Fulcrum BioEnergy to build a facility capable of producing 10 million gallons of jet fuel per year in Nevada. The stakes are high – if TRI can successfully demonstrate that its technology is sustainable and practical, the USDA and DOD will fund the facility. And the technology, Keenan says, could play a crucial role in solving one of the major problems facing the environment. “The bio-refineries will take garbage – which is a huge problem – and turn it into fuel,” she says. “If we can get one built, I will feel like we’ve won the lottery.”

Investing in the future

Contributing to the greater good is one of the most rewarding aspects of her work with Abell Foundation, says Keenan. The goal of the organization is to make “a really positive impact on mankind,” and help tackle key challenges facing urban cities like Baltimore.

The direct investments in companies that she oversees – like Paice and TRI –“can provide significant returns on the Foundation’s investment, giving it additional resources to invest in the community while also achieving important social and environmental goals,” she says. Keenan credits UNC for helping develop the mentality that hard work pays off, preparing her for a successful business career. “UNC is an important part of who I am,” she says. “It’s been my privilege to have the opportunity to make a difference.”