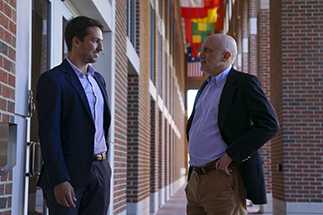 If you ask Wayne Landsman, the KPMG Distinguished Professor of Accounting at UNC Kenan-Flagler Business School, he will tell you he never imagined traveling and teaching business on an international scale.

“When I graduated with my doctorate in business from Stanford in 1984, it wasn’t something people did,” Landsman says. “At that time, the rest of the world was hungry to develop educational programs in business that would be on par with the United States, and there weren’t many American academics traveling overseas.”

Landsman cites a 2003 opportunity to teach abroad as the commencement of his interest in international partnerships. “One organization that has been working to foster international exchange in business since the time I was a student is the European Accounting Association,” Landsman says. The association holds an annual meeting and doctoral colloquium during which students present their work to faculty from around the world. “I was invited to teach at the colloquium in 2003 in the Czech Republic, and that’s kind of where it all began.”

At that first colloquium, Landsman connected with a doctoral student from a business school in Belgium, and was so impressed by her research that Landsman invited the student back to the U.S. to study at UNC under Landsman’s instruction.“ That started the process of me seeking out outstanding students in business doctoral programs across Europe and offering them the opportunity to visit and study at UNC as a way to bolster their training,” Landsman says. “We saw great success with the first student I brought over, and she and I continue to stay in touch and author academic articles together.”

From that point on, Landsman sought to institutionalize doctoral exchange between UNC Kenan-Flagler and business schools across Europe. “My students here at UNC benefit enormously from the different perspective that international students bring,” says Landsman, “and the international students have an opportunity to establish long-term connections in the U.S.”

Over the course of the last three decades, Landsman has expanded his network in Europe beyond the European Accounting Association, teaching doctoral level business courses at schools in Denmark, Austria, Germany, the United Kingdom and beyond. During periods abroad, he seeks students who may be interested in joining his program in the U.S. for further study. He now has longstanding relationships with schools such as Babeș-Bolyai University in Romania (BBU), with which he developed the first student and faculty exchange agreements in 2016.

Since then, Landsman has worked with international liaison officer Melissa McMurray in the Global Relations office at UNC to establish agreements with other respected business schools in Europe, including Charles University in the Czech Republic; University of Graz in Austria; University of Ljubljana in Slovenia; WHU – Otto Beisheim School of Management in Germany; and the Nova School of Business and Economics in Portugal.

The first international students to participate in one of the established exchange programs came from BBU and Graz in the fall semester of 2017, and Landsman already has several other students lined up for the 2018 academic year. As a result of his and McMurray’s efforts, Landsman has also obtained funding for four of the exchange programs through Erasmus+, a program of the European Union that funds scholarly exchanges between students in Europe and the United States, with additional funding expected next year.

“One of the goals of the University as a whole is to establish and maintain a deep international presence at a scholarly level,” Landsman says. “That’s what I want to do with these exchanges, and it has been deeply rewarding.”