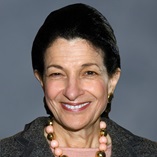 Snowe represented Maine in the U.S. Senate and the U.S. House of Representatives from 1979-1995. The first woman in U.S. history to serve in both houses of a state legislature and both houses of Congress, she built a reputation as one of Congress’ most influential moderates and worked on issues of fiscal responsibility, education, national security and healthcare.

The topic of Snowe’s speech will be “What’s gone wrong in Washington and why it doesn’t have to be this way.” She will assess the current state of Congress and offer concrete ideas on how it can restore its ability to reach consensus.

Invitations and more information will be sent out before the event, which will be held at 5:30 p.m. in Koury Auditorium. It is free and open to the public, but please register to confirm your attendance. Videos of the lecture will be available on our website after the event. Register for Snowe’s talk and read more about her here.

The Weatherspoon Lecture was created with a generous gift from longtime UNC Chapel-Hill and UNC Kenan-Flagler supporters Van and Kay Weatherspoon. The series provides lectures by outstanding visiting scholars and world leaders from the fields of politics, education, business and government. The purpose of these lectures is to enrich the professional lives of members of the UNC Kenan-Flagler community and provoke interesting discussion and debate.