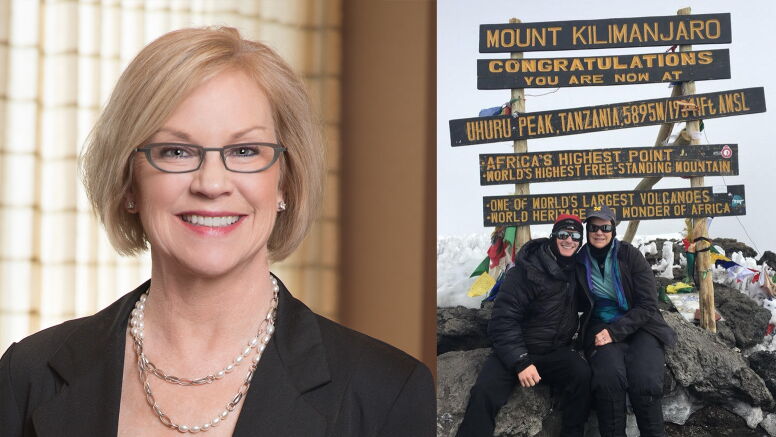 She’s consistently ranked as one of the most powerful women in business, but Cathy Bessant’s favorite title is “proud mom.” That’s what comes first on her Twitter bio. Her title at Bank of America, vice chair for global strategy, is listed last.

Bessant’s life overflows with remarkable experiences — in and out of the office. Now based in Paris, she has worked around the world since joining Bank of America over 40 years ago, at times managing nearly 100,000 employees and embracing cutting-edge financial technology.

She is seen as a problem-solver and a forward-thinker. Obstacles are always embraced instead of avoided — even when the obstacle is reaching the summit of Mount Kilimanjaro, the world’s highest free-standing mountain. She has done that, too, of course.

Next up: UNC Kenan-Flagler’s annual Weatherspoon Lecture on Feb. 21 at 5:30 p.m. in Koury Auditorium (register here by Feb. 17). The free lecture, open to the public, has brought world leaders in fields such as business, politics and education to the Business School for three decades.

Here’s more of what you need to know about Bessant before her talk on the importance of relationships, women in business, global education and more.

1. She’s done a little bit of everything at Bank of America.

Bessant took on her latest position at Bank of America in 2021, but she notably served as the company’s chief operations and technology officer and ran cyber security for the previous 11 years, focusing on such vital issues as artificial intelligence integration. Over four decades she took on wide range of roles at Bank of America, everything from president of global corporate banking and global product solutions to chief marketing officer.

Inspired in part by the experiences of friends and family with disabilities, Bessant is the executive sponsor of Bank of America’s Disability Advisory Council and lauded for her steadfast dedication to disability employment programs and services. She helped create the company’s LGBT Ally Program and has fought for more resources to support women in sports, especially in field hockey. Bessant Field at Queens University of Charlotte is named for her.

3. She has been called unsinkable.

She was once introduced as “unsinkable,” a reference to both her tenacity and empathy. Bessant more frequently calls herself “bulldogged.” She grew up with limited means, an experience that fuels her reputation for tackling public and private challenges fearlessly. She has reversed the fortunes of numerous Bank of America business units and brought together the worlds of business and academia to address using AI responsibly. She’s also a breast cancer survivor who successfully climbed Mount Kilimanjaro eight years after her diagnosis.

“I’ve never seen a situation I didn’t want to take on,” Bessant told American Banker. “I’m persistent and even when I’ve had failures I get up and do it again.”

Bessant has collected many honors throughout her career, including being named the most powerful woman in business by American Banker three years in a row. In 2020, she was inducted into American Banker’s Hall of Fame. She was awarded the North Carolina Order of the Longleaf Pine, received the University of North Carolina at Charlotte’s Distinguished Service Award and was named one of the 50 most powerful working moms by Working Mother magazine.

Bessant studied English at the University of Michigan before switching to business. She still loves reading William Shakespeare and Herman Melville and draws leadership inspiration from their work.

“Shakespeare’s lessons, every one of them, are timeless lessons,” she once told CIO. “[My goal is to make timeless decisions and design platforms that are not subject to timed obsolescence, which I believe is possible, actually. I think that’s what it’s all about.”