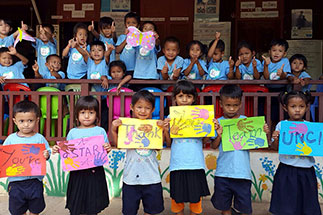 As Jenn Brown (MBA ’18) wrapped up her stint in Cambodia as chief operating officer of the nonprofit Senhoa, she had a few things yet to do.

Among them: accompany the young women she supervised to the cinema to see “Wonder Woman.” One of her staff had seen the movie and just couldn’t stop talking about it.

A film about a woman discovering herself – her power and potential – couldn’t be more appropriate for the women who work at Senhoa.

Senhoa is a jewelry-making social enterprise for women who are survivors or are at risk of human trafficking and sexual exploitation. Founded by Lisa Nguyen, all profits support education and early-intervention initiatives to protect and strengthen underprivileged communities.

Brown and six MBA@UNC classmates got involved with Senhoa through Student Teams Achieving Results (STAR), the UNC Kenan-Flagler Business School program in which students serve as consultants to businesses.

“I just thought it would be a really cool way to take the knowledge I’d gained from UNC Kenan-Flagler and my experience in operations at Hershey, pull it all together and give back to a nonprofit,” Phillips says. “UNC Kenan-Flagler wants to build global leaders – leaders with global business competencies – and also focuses on community involvement and teamwork. That all came together in this project.”

Senhoa offers its artisans an opportunity to gain confidence – to learn “a trade with dignity,” Phillips says.

“They’re learning self-worth, and how beautiful they each are,” she says. “They’ve all been in some pretty terrible situations, and Senhoa is just a very positive environment.”

“It’s so empowering for these women who have been really marginalized,” Brown adds. 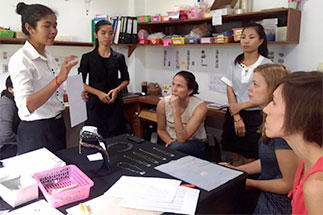 The key questions in the STAR project were whether Senhoa’s jewelry business could be scaled up, how, by what factor and over what time frame.

The STAR team began their work with a trip to Siem Reap, a town in northwestern Cambodia, where they spent 10 days learning about Senhoa’s operations. An artisan complained of recurring headache during the STAR team’s visit and one of the MBA@UNC students – a nurse practitioner – determined that poor eyesight was the problem. The STAR team paid for glasses for the artisans who needed them, and Senhoa started giving eye exams to the artisans.

They returned to their respective homes around the world – and continued to collaborate on the project using MBA@UNC’s state-of-the-art platform to formulate a business plan.

They delivered their final recommendations – on human resources and organizational structure, operations, finance and sales – to the Senhoa board in Chapel Hill in December 2016. They also addressed the role of in-country general manager. “Our recommendation was to invest more in that role,” she says, “and we provided a draft of a suggested job description.”

Brown returned to Cambodia to fill in as COO. The work appealed to Brown, who had worked internationally for 11 years, most recently overseeing the launch of a nonprofit children’s hospital in Laos.

She implemented a number of the STAR team’s recommendations, largely in HR and operations. New business processes are in place, all based on the plan the team submitted, and Senhoa purchased a software system to track all raw materials.

They also now have data to estimate the target production time for each piece of jewelry. Brown submitted a report to Senhoa’s board of directors indicating that sales could increase by 50 percent with raw materials as the only additional cost.

“Ultimately, the goal is to reach and work with more at-risk young women,” she says, “which requires growing the business side of the organization.”

An average day for Brown began with a 10-minute bike ride from her apartment, down Siem Reap’s potholed, dirt roads to Senhoa’s offices in a two-story, traditional-style wooden house.

Senhoa has a staff of 14, including artisans, supervisors, a production manager and a bookkeeper. In addition to earning a living wage, the women receive benefits, such as computer and English classes and annual checkups.

Brown also helped develop a framework for a variety of life skills. Senhoa held a values workshop, for example, exploring what the work means to the women and what it means to be an artisan. The artisans   described their dreams and goals, which were posted on a workshop wall as reminder and motivation.

New opportunities for Senhoa continue to emerge. Brown reports that a project with “a major international cosmetics/beauty brand” – whose identity she can’t yet reveal – is in the pipeline. That relationship, she says, is a result of the STAR project and UNC network.

Another exciting development was news that Senhoa received approval for placement in the duty-free shops in the Siem Reap and Phnom Penh airports.

“This is a great new distribution channel for us,” Brown attests. “The duty-free shops are managed by an international company, and we’re a small, hand-crafted cottage industry. Getting everything in line to meet their standards with packaging and bar codes and display cases was a major undertaking.”

Brown took pictures of one of the displays in an international-departure terminal. “I wanted to say to them, ‘There are thousands of people a day coming through from all over the world, and they’re seeing what you’ve made. That’s something you should be very proud of. That jewelry represents you, your strength, your empowerment.’”

Putting it into practice

Meena Dorr, former UNC Kenan-Flagler’s director of business partnerships and now a Senhoa board member, witnessed how transformative the experience has been for the students. “Over and over, I’ve heard how much it has changed them and their thinking,” she says. “And it’s been an opportunity to put classroom learning to good practice.”

“I’ve drawn on so much knowledge from my MBA program,” Brown says. “From my operations class, for example – I might not use the specific formulas and problem sets that we practiced, but it taught me how to track data and project out into the future. It was great for me in terms of development.”

MBA students and the lotus 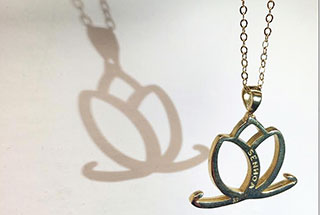 “These women have had such horrific lives,” Dorr says, “but they’re beautiful, and they create something beautiful.”

Seanglai exemplifies what the organization is all about. She has been with Senhoa about five years and now is the production supervisor.

“She’s completed high school and has developed her computer skills,” Brown says. “She talks about her dream of making enough money to move back to where she’s from to support her parents and build a place where tourists can come – a place that has a lotus pond and offers fishing, and will generate money to support a school in the village.”

“These were all online MBA students, working from different parts of the U.S. and the world,” she says. “They gathered in Cambodia, returned to their homes to communally fashion social entrepreneurship that’s changing lives, and created a very special bond they’ll always share.”