Skip to content Skip to Programs Navigation
Failing all in

It’s hard to put into words what we learned from our Global Entrepreneurship Lab in Denmark with Ted Zoller, that captures the highlight reel of inspirational moments.  As a class, we experienced business pitches from entrepreneurs, politicians and business incubators; lunches, dinners and late nights discussing our own professional and personal blunders fueled with Acquivit; and karaoke where we all sang our hearts out. 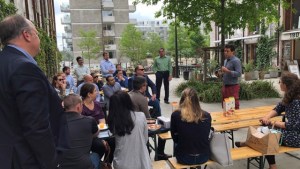 However, what I will cherish the most came from those conversations on failure and our triumphant return. Four key lessons I will apply to my first venture include:

A mandatory failure loop – Accelerace founder Peter Torstensen told us as entrepreneurs we must learn from both the positive and negative customer meetings. This in theory seems like common sense, but Torstensen challenged us to follow up with customers we have failed and then actually listen to what they have to say. As an employee and human, I fail someone or something every day, but rarely do I go back and ask them for feedback on my failure. Who wants to relive their failure?  Well now I can say I’m forcing the loop into my every day personal and professional life so I can learn from my mistakes and succeed next time.

No excuses, fail anyways – Mai-Britt Zocca, CEO and founder of IO Biotech ApS, responded brilliantly when pressed on how she dealt with gender in a predominantly male field. The moment, while so simple, stuck with every woman in class. She mandated that we should never allow gender to be an excuse for not getting funding, a specific leadership role or a company off the ground. As entrepreneurs, we all know that for one reason or another, we will be told no many times over, but we can never use an excuse as a reason to accept failure.

Fail, pivot, fail, pivot – On day four, after an adventurous bike ride, during rush hour traffic where I certainly failed repeatedly to give the correct hand signal, we spent time with Donkey Republic CEO Erdem Ovacik. His firm had to pivot its business model several times until finding the model they eventually scaled to different cities and countries. While also another common-sense rule, I challenged my own way of thinking; I’ve been invested in seeing a business succeed from my own narrow viewpoint, being scared to fail and then pivot. However, fail and pivot I must. 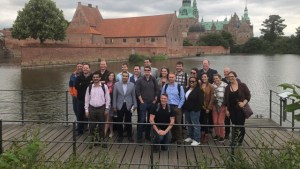 Failing all in – The biggest lesson I took away from the whole trip, both professionally and personally, was to go all in regardless of how scared I am to fail. I must fail all in if I ever stand a chance of succeeding. During every presentation and pitch we listened to over the week from serial entrepreneurs, we learned that we will face a high failure rate and the odds are not in our favor. Several entrepreneurs were on their second or third businesses but were unstopped by the naysayers, critics and their prior failures. They all continued to follow their passions and create a new venture. We, as entrepreneurs, will surely experience a variety of failures. But after each failure we must pick ourselves up, maybe go take a shot (or two or three) of Aquavit, sing a few songs at karaoke, then pivot to our next failure which will lead us to our ultimate success.