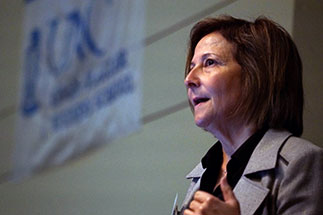 The daughter of an Italian immigrant, Darcy Antonellis is known by her employees for her hard work, dedication and “gelato afternoons.”

Antonellis is CEO of Vubiquity, a global provider of premium content services connecting hundreds of content owners to thousands of video distributors across 121 countries supporting 80 languages.  She previously served as president and chief technology at Warner Bros. Entertainment.

On warm, sunny days – which appear to be frequent in Southern California – Antonellis enjoys taking a handful of her employees to the nearby gelato shop to discuss their hopes, fears and career aspirations. She believes that this not only exemplifies who she is as a business leader, but also a human being since she is responsible for their future.

“I go to bed every night thinking about 600 different mortgages – the 600 employees at Vubiquity and their families,” says Antonellis, who gave a keynote address at the 2017 Carolina Women in Business Conference at UNC Kenan-Flagler Business School.

Her belief in moments like gelato afternoons are guided by two her father instilled in her at a young age and she guide her as a leader.

Having worked in the male-dominated engineering industry since college, Antonellis applied his advice to get the job done. There were times when she met with failure, but she persevered to embrace moments of growth and move forward in her career.

One of her first experiences with failure was as a young engineer working for a local news affiliate in Philadelphia — a wiring mistake sent her flying across the set only minutes before the news broadcast went live.

“Notable failures are okay, just as long as they are outweighed with notable successes,” Antonellis says with a laugh.

Failures will define your success sevenfold, she says. Only perseverance will carry you through the challenges to see the other end.

She has persevered in her personal life, too. While at Warner Brothers, Antonellis adopted two teenagers from Bogota, Colombia. The boy was functionally illiterate and the girl spoke only Spanish, so Antonellis welcomed a world of sign language-type hand movements and translator apps to guide household interactions. This was one of the most influential periods of her life, teaching her what people are capable of achieving.

Her daughter learned English in high school by reading Othello. She read the Spanish translation version, followed by the English version and then listened to the book on tape in English. She did this every night, until she could get a better handle on her school work. “Now, she is preparing to graduate from college,” Antonellis says.

Witnessing her daughter’s intense desire to learn is personifies what Antonellis’ father’s emphasis on perseverance. It guides her leadership style and her hopes for being a good mentor to those 600 employees.

By recognizing the growth potential from failure, and using mentors and thoughtfulness to navigate her male-dominated career field, Antonellis makes strides to represent her father’s wishes for her – perseverance and an exceptional life.

“Listen, listen, listen and then never be intimidated to present a thoughtful solution,” she says. “And on a personal level: get sleep. Your brain is problem solving for you and you don’t even know it.”