Exceeding expectations: Research has ROI for the military 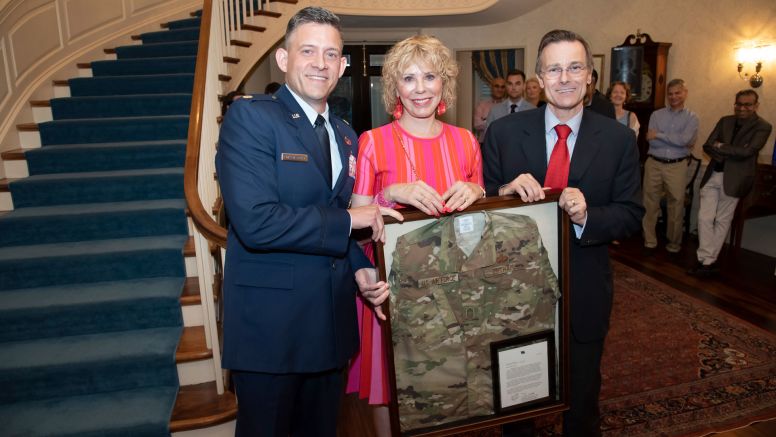 UNC Kenan-Flagler has a long history of welcoming active military and veterans to its programs. Those still serving can have specific needs that produce challenges and greatness at once.

U.S. Air Force Major Dan Finkenstadt is earning his PhD in marketing, following a path that is somewhat foreign to business schools.

He has specific orders from the Air Force to earn his PhD in just three years instead of the typical five. And there’s a job waiting for him when he graduates: He will be an assistant professor at the Naval Postgraduate School (NPS) Graduate School of Business and Public Policy (GSBPP) in Monterey, California.

Finkenstadt will teach in the NPS MBA program from which he graduated in 2011. It provides the only defense-focused, graduate-level education in the U.S. The students are being prepared for strategic positions within the U.S. Department of Defense.

He held a unique position within the military before he began his doctoral studies. Part of his job that caused him consternation on a daily basis involved sourcing knowledge-based services (KBS). Services are the highest spend area in the Air Force, surpassing even major weapons systems like the Joint Strike Fighter, and KBS is the second largest spend area in the Air Force services portfolio, only after aircraft maintenance.

Finkenstadt began to think like a researcher. He wanted data to inform his work and improve decision making.

Mindful of the need for transparency and fairness when making hiring and purchasing decisions, he saw processes that could be improved. Contract decisions in a business-to-government deal typically default to the lower price, says Finkenstadt. After all, that’s the easiest way to justify the decision and show fairness. But he found the government was often trading off quality for a lower cost.

He became determined to come up with a rating system that would clearly articulate and validate the process of choosing one company over another for government contracts. He developed a monetizable scoring methodology for KBS proposals based on references and past performance. The U.S. General Services Administration used Finkenstadt’s scale in previous acquisitions. Some of these acquisitions using his methodology have gone before the U.S. Government Accountability Office and been supported.

“I had pulled the scale out of the ether,” says Finkenstadt. “I felt I needed to do more research to perfect it.”

That’s when he reached out to Professor Valarie Zeithaml at UNC Kenan-Flagler, a pioneer in services marketing. While her work was geared toward business-to-consumer services, she was willing to look at Finkenstadt’s method and help him develop a tailored scale for business-to-government markets.

His desire to work with Zeithaml led him to UNC Kenan-Flagler’s PhD Program. And choosing UNC Kenan-Flagler turned out to be a great decision, says Finkenstadt. “I’ve never had a bad professor,” he says. “You walk into the marketing department at UNC and throw a rock and hit a genius.”

Finkenstadt believed business schools, including UNC Kenan-Flagler, were designed for three-year completion. In other words, he expected someone had a plan for him to follow to get the overwhelming amount of work done in that time period. When he learned that wasn’t the case, he turned to support from the UNC Kenan-Flagler community to cut a path for his success.

They came up with creative solutions. Supportive professors respected his unique needs for completing his courses and working on his dissertation. His advisor got him started on theory research months before he arrived at UNC Kenan-Flagler, which was vital to positioning him to complete comprehensive exams on time while advancing his research, which can be a tug-of-war between academic and mission contributions.

“It had to have an ROI for both the military and UNC,” says Finkenstadt. “You have to manage expectations. I’ve been blessed to have the right people pushing me to be academically rigorous.”

Of course, he wanted his research to be the next chapter for his original rating system. Its purpose: improve source selection and performance management for business-to-government, knowledge-based services using a service-dominant approach.

Most students focus solely on classwork in the first two years of the PhD program, but Finkenstadt will be three-quarters done with his dissertation when his classmates are just getting started. The pressure was on from the start, and the first year was particularly hard.

“Dan came to Kenan-Flagler highly motivated with a clear end goal. He had been using my research in the Air Force before he applied to UNC, and wanted to know how to further apply it to business-to-government,” says Zeithaml. “He is the hardest working PhD student I have ever had, and is exceeding my expectations. He will meet both his goal and our goal for him with a high quality dissertation and contribution to the Air Force.”

The results of his hard work are evident. Finkenstadt will present to the American Marketing Association in Chicago in August 2019. In a “lightening” talk he will pitch his services marketing research.

What’s next? Once Finkenstadt earns his PhD, he will teach strategic purchasing to MBA students at NPS. He’ll continue to conduct research relevant to the Air Force, and, most importantly, mentor MBAs conducting their thesis research.

After his three-year commitment ends, he will owe the government two more years of active service before he is eligible for retirement. That’s when he hopes to return to the Carolinas and teach in the executive education sector. 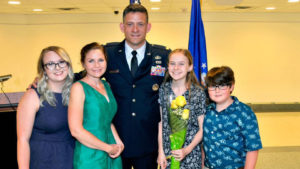 In the meantime, Finkenstadt is enjoying family life with his wife and their two children at home. They also have an adult daughter serving as a weather specialist in the Air Force. As someone who grew up in the foothills of South Carolina, Finkenstadt also appreciates fishing and rebuilding old Jeeps.

An accomplished person who has received many accolades, Finkenstadt is most proud of winning the silver medal from the National Reconnaissance Office (NRO). He received the government award sooner than most do, and NRO recognized his business acumen in a place full of science and engineering stars.

Part of the reason Finkenstadt has had success, he thinks, is because of his desire to apply learning.

“I’m a practitioner first,” he says, “and academic second.”