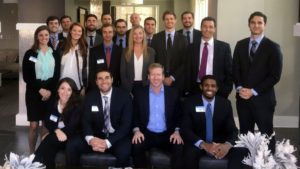 Peering out of the top story of Kane Realty’s newest office tower overlooking Raleigh’s North Hills neighborhood makes you realize how much the area has changed over the past twenty years.

In 1999 John Kane, chief executive officer of Kane Realty, bought North Hills Mall, which had been built in the 1960s and had fallen into neglect and disrepair. What started with a mall renovation spurred development after development to the point where North Hills and Kane’s adjacent Midtown area form its own urbanized mini city where “Live, Work and Play” is more than a saying. Aside from hosting more than 400 events per year, the area features beautiful architecture, ample attractions and large greenspaces that draw people in. Office buildings, hotels, retail space, and residential buildings in the area all bear Kane’s thumbprint.

Looking out past North Hills and the new towers under construction, there is a beautiful view of Raleigh. Buildings pop up above the otherwise green landscape and it becomes clear why it is the City of Oaks. A series of tall skyscrapers stick out representing Raleigh’s CBD (Central Business District) where Highwoods has invested $2.75 billion since 2005.  Our group toured the newly-renovated One City Plaza, a dated building from 1985 that Highwoods rejuvenated into a 370,000 SF Class A office building with additions such as an 11-story curtain wall with LED accent lighting. Next door, Highwoods’ Charter Square is home to 243,000 SF of Class A, LEED Platinum space that is 70 percent leased up in just over a year since opening.

Looking south beyond the CBD shows a large swath of partially developed land that encompasses North Carolina State University’s Centennial Campus.  This 1,000-plus acre tract inside the beltline includes walking and biking trails, a championship golf course, apartments and townhouses, and co-working spaces with some of the world’s leading tech firms. Harlan Stafford (MBA ’96), director of university real estate & development for NC State, shared the long-term plans for the research campus that span multiple decades.  We toured the iconic, ultra-modern and high-tech Hunt Library.  Jed Gammon, project manager at White Oak Properties, shared the challenges of developing townhouses on Centennial Campus where there are multiple entities involved and complex restrictions.

Surrounding Centennial Campus are numerous student housing developments with many bearing the Preiss Company logo.  In 1987, Donna Preiss (AB ’73), chief executive officer of The Preiss Company, saw that student housing needs in Raleigh were not being addressed and she became a pioneer in the sector. Amenities like individual bathrooms, study rooms, game rooms, and exercise facilities were a hit, and the Preiss Company now manages $1.4 billion in properties providing over 26,000 beds to students across the country.

From North Hills to the CBD to Centennial Campus, the Raleigh area is growing and growing fast.  The state’s capital hosts many government agencies and boasts a strong technology and pharmaceutical presence.  The strong university support of NC State and surrounding schools like UNC-Chapel Hill and Duke University, matched with an affordable cost of living compared to other major U.S. cities, continues to drive growth. With Wake County welcoming 64 new residents per day, it looks like this area will continue to thrive and prosper.