Evolution of a corporate idealist 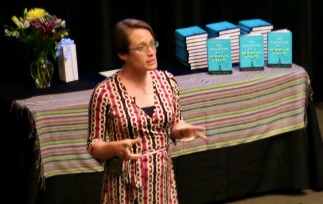 Business can have a positive impact on the world, says Christine Bader.

The former BP employee and author of “Evolution of a Corporate Idealist: When Girl Meets Oil” gave the keynote address at a special event celebrating UNC Kenan-Flagler’s 15th anniversary as a global leader in sustainable enterprise.

Bader became interested in the impact of business on communities while working in the nonprofit and government sectors after she graduated from college. While a corps member for City Year and an urban fellow for the City of New York, she realized that businesses made a substantial impact on the populations and cities she served.

“It occurred to me while I was doing those jobs, the private sector seemed to be shaping a lot of the situations I was reacting to,” she says. “Businesses had come in and they seemed to be somehow determining the fate of the host communities. I started to get really intrigued by the power of business and how they think about these decisions that have such an impact on the rest of us.

To learn more about the dynamic between business and society, Bader pursued her MBA at the Yale School of Management. She interned at BP and after graduation joined the company full time to manage some of its largest projects in the developing world.

Bader’s first project was based in Indonesia, where BP planned to build an underwater pipeline to tap into a pocket of natural gas beneath a mangrove swamp. She performed human rights and macroeconomic assessments to ensure the fair treatment of environment and the people in the area. She also managed the social impact of building factory housing in Shanghai.

Bader saw the impact of her work and felt overwhelming support from BP. “I completely fell in love with big oil,” she says.

In 2006, she created a part-time pro bono role as advisor to the U.N. Secretary-General’s Special Representative for business and human rights, which she took up full-time in 2008. She found, however, that working on the policy side was not as dynamic as business.

“I just started finding myself gravitate back to the corporate people in the room,” Bader says. “I really think business is where it’s at.”

In 2010, BP’s Deepwater Horizon oil rig exploded, killing 11 people and spilling millions of gallons of oil into the Gulf of Mexico.

“This very different BP came out of the aftermath,” she says. “This was not my BP.”

The disaster was a wake-up call to Bader to reevaluate the impact of corporate social responsibility (CSR).  She looked for answers to the question “Why do companies fail?”

The process resulted in insights about why corporations fail – and what they need to succeed – at CSR.

The CSR issues that businesses tackle on a daily basis are far from simple – and sometimes, the results are “not good enough,” says Bader, but the collective sum of all positive actions from businesses ultimately has an impact on the world.

“The punch line is that incrementalism makes a difference – it’s a means of transformation,” she says.

There are tensions between business goals and CSR. “Our role as leaders in this field in sustainability is not to resolve or solve any of those tensions – it is to embrace them,” Bader says. “We must train leaders to thrive in that sort of complexity.”

Her journey as a “corporate idealist” leaves her optimistic that business ultimately can have a positive impact.

“Business can be a force for good in the world,” she says, “but it won’t happen by accident.”

The UNC Kenan-Flagler Center for Sustainable Enterprise and Energy Center co-sponsored the event with the UNC Parr Center for Ethics.