Everybody counts with C.J. Skender 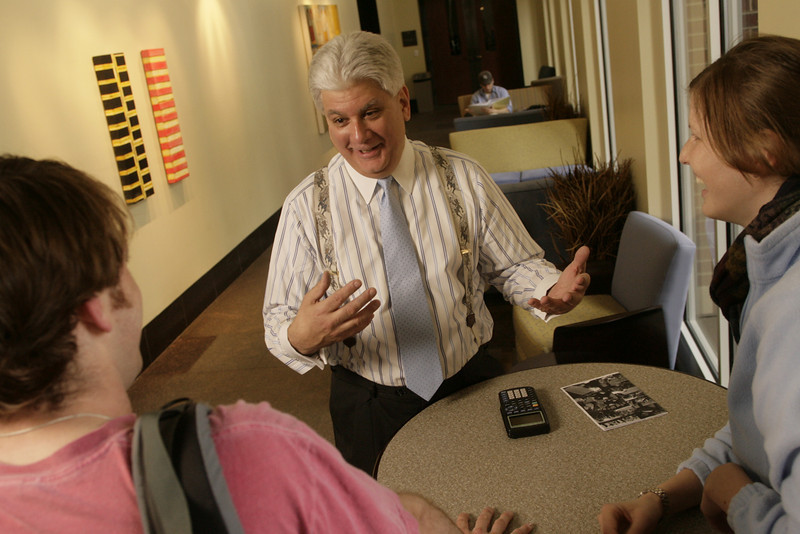 One hundred and ninety students.

That’s how many were on a waiting list for an accounting class taught by UNC Kenan-Flagler professor C.J. Skender – an 8 a.m. class, to boot. What could possibly possess nearly 200 business school students to vie for places in an early morning accounting class – a class that had to be relocated to Koury Auditorium to accommodate overwhelming demand?

The answer is simple: The professor.

Skender has earned 11 professional designations and received multiple teaching awards. He can tell countless stories of students who thrived under his tutelage and used lessons learned in his classroom to guide them as they climbed the ladder in the corporate world (and in one case, The White House). Skender embodies UNC Kenan-Flagler’s core values; it seems clear that he was destined to be a Tar Heel.

Skender is so highly regarded that Wharton professor Adam Grant dedicated an entire chapter to his teaching philosophies in his book, “Give and Take: A Revolutionary Approach to Success.” As Grant explains, Skender is a “giver,” someone who believes in giving everyone a chance, puts the needs of others before his own and always looks for the good in people. “In Skender’s mind, every student who walks into his classroom is a diamond in the rough – able and willing to be mined, cut and polished. He sees potential where others don’t,” Grant writes.

And UNC Kenan-Flagler students know that Skender’s accounting classes are unlike any other. Skender structures his classes to give every student a chance for success – if they’re willing to work for it. “It’s easy to see the students who are invested in the class – they show up for each class with their assignments completed, ask questions and take advantage of office hours.” His mantra is simple: Keep up, do the work and you’ll succeed.

Skender also incorporates fun elements into his lectures, starting each session with “fourplay” – four songs that set the tone for the day – and breaks up the monotony of long classes with trivia questions, rewarding correct answers with candy. “I just thought about what kind of class I’d like if I was the student,” he says.

Skender thrives on helping his students to succeed and is motivated by the progress they make over the course of a semester, with many often going from “zero to 50” in terms of their understanding of the material. “When I connect to a student and help them with a problem or something they’ve been struggling with, I’m on fire for the rest of the day,” he says.

The desire to help his students succeed means sometimes sacrificing time at home for long hours on campus in the weeks before exams as he helps students review and prepare. “I always ask myself, ‘What if this were my own son or daughter? How would I want their professor to treat them?’” Ironically, it’s a situation he’s faced more than once, having taught all of his children in classes at UNC Kenan-Flagler.

Lessons in Skender’s classroom often delve deeper than accounting. When students become overwhelmed during the semester, he reminds them to work hard but set realistic expectations. “You can’t be perfect. No one can. You should strive for excellence but never be satisfied,” he says. And woven into lectures about cost analysis and management are even more subtle life lessons, often in the form of quotes from his favorite song lyrics, movies and music. Movie clips from “Rocky” might inspire tenacity, while a subtle nod to valuing family comes in the way of Harry Chapin’s “Corey’s Coming,” a song for which Skender’s daughter is named and a “fourplay” mainstay each semester.

When asked what advice he would give to all of his students, Skender doesn’t hesitate.

“Family comes first, always,” he says, pulling out a copy of “Chasing Daylight,” the story of former KPMG CEO Eugene O’Kelly who, at the height of his career, was diagnosed with late-stage brain cancer and given just months to live. Kelly writes that over the course of a decade, he had only taken time to have lunch with his wife on weekdays just twice – something that hit home with Skender. He shakes his head as he quotes the Jim Croce song “Time in a Bottle” – “There never seems to be enough time to do the things you want to do once you find them.”

As beloved as Skender is by students, they are equally beloved by him. When asked about defining moments in his career, Skender doesn’t mention the year he received the Outstanding Educator Award from the N.C. Association of Certified Public Accountants, or the time he was inducted into the Wells Fargo Hall of Fame. In fact, his favorite memories are of his students: the semester when, in the last minute of the last day of class, they all threw candy at him at the same time, and the time they all showed up wearing bow ties, a tribute to the snazzy style that Skender sports on Mondays, Thursdays and Saturdays.

As he reminisces about his years of teaching at UNC, Skender quotes the Beatles: “In my life, I’ve loved them all.”