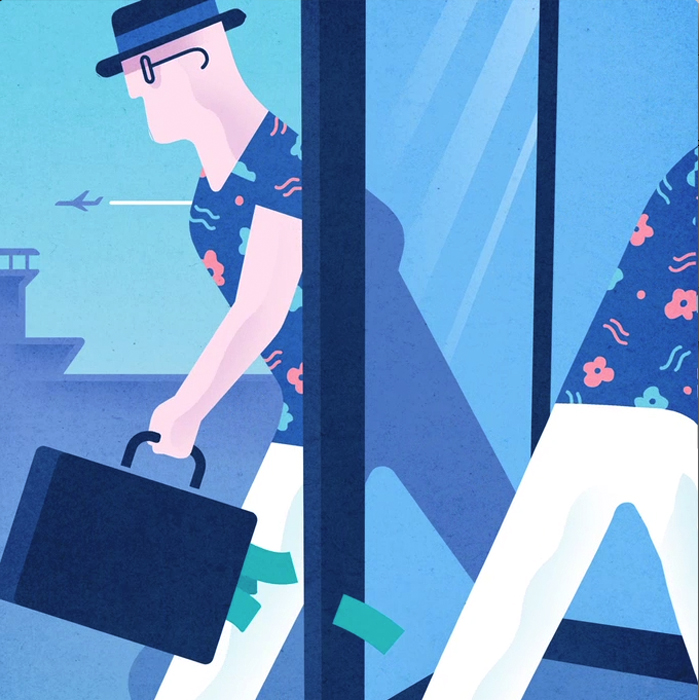 As long as there have been taxes, there has been tax evasion.

Several prominent instances of offshore tax evasion made headlines in 2009. Around that time, Edward Maydew, the David E. Hoffman Distinguished Professor of Accounting at UNC Kenan-Flagler, was collecting data for a study on whether tax treaties affect foreign investment. He realized his data could be used to shed light on a specific type of tax evasion called round-tripping.

Maydew changed course and, partnering with Michelle Hanlon of MIT and Jacob Thornock (PhD ’10) of the University of Washington, came up with ways to test for round-tripping tax evasion and what sort of enforcement works to discourage it.

Their study is the first to empirically show investor tax evasion affecting cross-border investment in equity and debt markets. They encapsulated their results in “Taking the Long Way Home: U.S. Tax Evasion and Offshore Investments in U.S. Equity and Debt Markets” in The Journal of Finance.

“Studies rarely look at cross-border tax evasion because it is hard to find,” Maydew says. “Illegal activities are inherently hidden. You have to infer illegal behavior from the data.”

Maydew, who teaches tax strategy, emphasizes the difference between tax avoidance, a legal tax planning strategy to minimize taxes paid by a business, and tax evasion, which is illegal. Most financial activity flowing through tax havens is for legal tax avoidance reasons.  The practice of round-tripping isn’t inherently illegal. It becomes illegal when a U.S. investor fails to disclose it to the IRS and uses it to hide income.

Round-tripping happens when a U.S. investor hides income by routing investments through a tax haven – an offshore country with few restrictions and that requires little information be reported. The investor sets up a corporation or other entity in the tax haven to appear to be a foreign investor. The U.S. taxes foreign investors much more lightly than it does U.S. investors, under the assumption that the foreign investor’s home country will tax that investor on returns. The U.S. investor deposits funds in a financial institution in the tax haven, in the name of the foreign entity he or she controls, then reinvests those funds back into a U.S. asset.  “It’s a lot like putting on a disguise, pretending you’re a foreign investor when you’re not,” Maydew says. “There are lots of ways to do that, and we can’t detect them all.”

Governments worry that offshore tax evasion has become easier over time because of the internet. Investors can set up an account online and transfer money into it in a matter of minutes.

To test for round-tripping tax evasion, the researchers turned to Foreign Portfolio Investment (FPI) data. Central banks keep records of FPI, which adds up to a considerable amount. In 2008, about $3.4 trillion of FPI came into the United States, $1.2 trillion of that from tax havens. The researchers collected data from FPI coming into the U.S. from 59 countries between 1981 and 2008, including a number of tax havens. To find what part of that came from tax evasion, they tested how FPI moved with variables that would affect only people who are evading taxes, and they controlled for other effects on FPI.

“If we suddenly see money shift around in predictable ways when these variables that affect only tax evaders turn on and off, then we can isolate the part that is tax evasion,” he said.

Maydew focused on Tax Information Exchange Agreements (TIEAs), which act like miniature tax treaties in the sense of making it easier to get information on suspected tax evaders. During the past decade, the Organization for Economic Cooperation and Development (OECD) and the U.S. cracked down on tax havens that were not sharing information with developed countries. Together, they pressured tax havens to enter into TIEAs. Presumably, investors who had something to fear from the transparency would move out. The researchers found that TIEAs had an effect.

“If we suddenly see that FPI from that tax haven dries up after signing a TIEA, then we infer that some of that FPI was tax evasion,” Maydew says. If the original funds transferred offshore were from income not declared to the tax authorities, a reasonable estimate of the tax revenue loss would be $8 billion to $27 billion.  And, a reasonable estimate of the expected annual tax evaded on subsequent investment income from round-tripping is on the order of $1 billion to $2 billion, the researchers posit.

Maydew and his colleagues were invited to present their results to the IRS and Senate staff interested in tax policy.

In 2010, the United States enacted the Foreign Account Tax Compliance Act (FATCA), which Maydew describes as “TIEAs on steroids.” The effect of FATCA is not reflected in Maydew’s study because his data source goes only to 2008, but the movement he has seen after tax havens entered into TIEAs suggest that FATCA will be effective as well. The law requires banks and financial institutions to collect much more information about people in the U.S. who have accounts at those banks. Some critics have deemed the law too intrusive, but Maydew says it is important to also recognize the benefits.

“You don’t want to be a country whose tax laws aren’t enforced well,” he says. “The burden becomes higher on the rest of the taxpayers.”