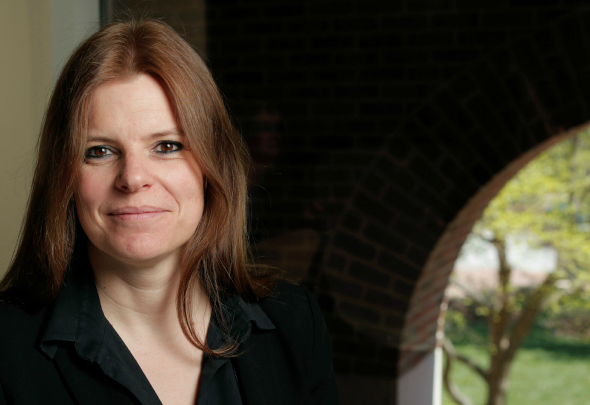 Eva Labro is a modern-day pioneer. A native of Belgium, where people rarely leave the comfort of their hometowns, Labro let her work and her husband lure her to new worlds.

While completing her PhD at Catholic University of Leuven in her home country, she was whisked away to London by her husband’s career. There she became a reader (associate professor) at the prestigious London School of Economics.

About five years ago, it was her turn to move the family when she received a call from UNC Kenan-Flagler. Today the award-winning teacher and researcher is an associate professor of accounting who teaches the core managerial accounting course to full-time MBA students, a PhD course in managerial accounting research, and an MBA elective on the financial management of health care institutions.

“It was a huge deal to move to London, and I did not want to go,” said Labro. “My husband’s job took us there, and I realized, ‘Belgium is not the center of the world.’”

Moving to the United States seemed like nothing after that initial move. And the exposure to different lands has shaped Labro as a person, professor and researcher, she said.

Indeed, Labro is a frontierswoman in her work, too. She is a three-time winner – in 2011, 2013 and 2014 – of the Greatest Potential Impact on Management Accounting Practice Award for her cost system research. In 2011, she won the Notable Contribution to Management Accounting Award, for reintroducing the simulation method in management accounting research. Garnering recognition from both practitioners and academics is meaningful to Labro because she wants to have an influence on business and academia.

The latest frontier she wants to conquer in her research is healthcare, an interest she picked up while teaching the MBA elective on the sector’s finances.

Her current research focuses on cost system design, an underserved area of great importance. Labro likes to study the rules of thumb that are presented in textbooks and test them. Sometimes she finds that information in the books is wrong. For example, because cost systems provide only a snapshot of costs at a given time many books suggest companies update cost allocation rates annually.

Labro’s preliminary results on how well this works have shown that such frequent minor updates usually do not improve the decision making in the company, and that companies are better off doing a more thorough cost system revision, even at lower frequencies.

Proving textbooks wrong isn’t Labro’s main motivation. She wants people to see the connections between management accounting and other areas of both accounting and the rest of business.

Some of her work, for example, has shown that the quality of internal reporting (otherwise known as management accounting) affects taxation outcomes. This is important to executives at firms because if they invest in good reporting up front, they will pay lower tax rates without taking on more tax risk. And who doesn’t want that?

“I’m on a mission to build bridges within accounting and other areas, such as operations management,” Labro said.

Labro’s research informs her teaching. She purposefully wants her research to have an impact on the business world her students return to when they graduate, she said.

One lesson she teaches her students is to identify the red flags that could be signs of a company in a “death spiral,” a series of decisions based on bad management accounting practice that could be the end of the business. Labro’s best teaching moments are when students return from an internship to tell her that they helped a company come out of the death spiral because they learned to recognize the signs in her class.

Some of the ways Labro helps students improve their management skills, she said, is by showing them how to support their big ideas with numbers and how to persuasively present these measurement skills to others.

Her students are not the only young minds she’s molding. Labro was pregnant with her first child and had to excuse herself from a conversation with a professor because of morning sickness – on the first day of her PhD program.

“I was going to have a family and a career,” she said. There was no stopping her, in fact. Her second child came toward the end of the program, which was tough, admitted Labro. “I was breastfeeding between writing my thesis, and living on no sleep.”

Now she’s mom to kids who are 17, 14 and 11. While she thinks they’re an exciting bunch, she is humble when describing herself. “I have a family with three kids and an academic career, so there’s not much free time,” said Labro. “I’m quite boring.”

But boring is probably not the word others would use to describe a woman who took on motherhood and her PhD at the same time, bravely moved her family to a new continent, and makes management accounting seem sexy and vital.